Why I Wanted To Get Away

Monday: (08/07) While having tea in the yard Lou provided a list of things to be done while I wait to go hiking. I moved all the planters from the walkway under the sunroom eaves. Then I cut a few more limbs from over our sun room then cleaned the accumulated leaves off the roof. Not a real easy task. I need to extend the handle on my push broom and use it to rake off the leaves. More like brush them off because they are stuck to the roof. My new blower came in handy for the fine stuff. That created a big pile of leaves that need to go someplace. The bins are already full so Lou got some big paper leaf bags. Next, I used my Webster broom to clean all the spider webs from the outside of the house. And that brought me to wash the outside of the house with the water brush. I also washed Ernie’s trailer while I was at it. All this brought me to about 3 pm and I still hadn’t eaten anything except a piece of Lou’s lemon pie about noon. My shower was nice because I was covered with leaf debris and totally soaked from washing the house. Lou called and said she’d bring a chicken bake from Costco for me I added a request for a berry smoothie. Since we don’t actually speak the same language, or so it seems. She bought a strawberry sundae. Tasty and about the same thing because she got caught in traffic and it was liquid when I got it. I also cleaned all my junk from the Hyundai so Lou can take it to the car laundry. It’s due for service and we can’t have the service folks think we don’t care for it. A third task was to replace the kitchen sink valve. It has an automatic valve that shuts off the water to the faucet when the wand is used. Unfortunately, it never turns fully on and often the water from the faucet is only a trickle. She requires a two valve faucet and they are rarely in the stores so I found one on Amazon and it’s on the way now.

Tuesday: (08/08) I moved the planters into place in the front of the house. I started working on the sprinklers to them and fixed the drip line to the plant on the porch. I ran out of drip ells so moved on to other tasks. I vacuumed the sun room gutter and installed foam to keep debris out in the future. I then made a run to OSH for the drip ells and some other fittings for the shower drain line. Granola and a smoothie for breakfast. Hotdog for lunch. Dim Sum treat in the afternoon. Tilapia fish with rice and vegetables for dinner. 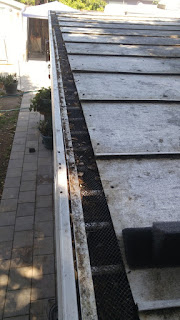 Wednesday: (08/09) I did a little gardening while Lou and Dawn package up the limbs from the oak tree for pickup tomorrow. I filled the empty concrete planters that I placed in the front yard. I added drip water emitters to all of them. In doing that I installed a new ½” line toward the front to catch one planter on the far side of the garage door. I was then able to add emitters to a couple of planters temporarily residing by Ernie’s trailer. It also made the emitters to Dawn’s bean planters flow better than the ¼” line that had gone to them. The new kitchen sink faucet arrived so I installed it. I had to make a run to the hardware store to get a beauty cap to cover where the now missing wand was and a new filter cartridge for our water filter. Low added that I get a new can opener and while there I picked up some plants for the new planters. I change the water filter but had to add a reinforcing board to install the screws in that held up the filter. The screws had ripped out the particle board so i added a piece of ¾” plywood glued and screwed to the particle board cabinet. Sliced apple with peanut butter for breakfast. Chili for lunch. Chicago Pizza for dinner with the Hackmans in our backyard.

Thursday: (08/10) Breakfast in the backyard until we heard the garbage truck out front. We all dashed out to watch. It was interesting because we had two full compost bins, four sacks of compost and a huge pile of bundled limbs. Cheap fun. I then planted the begonias I got last night into a couple of the concrete planters. In the afternoon I was busy working on my resupply plan changes. Granola for breakfast. Cauliflower and sausage for lunch. In the evening we went to Redwood City for a movie. We stopped for dinner at Harry’s Hofbrau on the way. We watched the movie Glass Castles at a theater downtown. It was a special showing with a 20-30 minute trailer interview with the author.

Friday: (08/11) Lou made corned beef hash and eggs for breakfast. A ham and cheese sandwich for lunch. I was packed and ready to head up to Oregon for my PCT hike on the train. The train was scheduled to depart at 2023 but was delayed. I checked my pack, said good bye to Lou and Dawn and they dropped me off at Dawn's Apartment for a nap while i waited until o145, the expeted new departure time.