Saturday: (02/24) I worked on the TV cabinet, sort of. I spent all my time tracing the cables. Many are spares. I can’t determine which is from the external cable input. After trying every way I could think of to determine which of the 12 cables was which I finally broke down and went to Fry’s Electronics and bought a cable tracer. It quickly confirmed the ones I had identified but can’t find the cable input. It must be a bad cable. If I’m lucky, one of the spares goes to the same place in the left rear cabinet. Lou was working organizing cabinets. Enchiladas for breakfast. Asparagus soup for dinner.

Sunday: (02/25) I worked on posting more of the missing photos for the past year onto the Blog. Now just about 6 months left to do. Dawn was busy with her book organizing and I hauled out 12 boxes to her shed and moved things around there to gain some shelf space. And I spent the rest of the afternoon working on the sprinkler drip system That included a trip to Orchard Hardware with Lou. Leftover enchilada for breakfast and lunch. Lou made baked ribs, baked potatoes and green beans for dinner.

Monday: (02/26) I spent the day until 3pm finishing uploading the photos to my blog for the past 15 months. I also polished the spelling and formatting in many of the posts. Interesting reliving the year. I still will be embellishing the photos with greater descriptions than exists in the current entries. Granola and banana for breakfast. Leftover enchilada for lunch. Pork chops with rice and asparagus for dinner. I showered and drove down to San Jose for the night.

Tuesday: (02/27) I was up at 0630. I walked to the other side of San Jose State for breakfast at La Victoria Taqueria. The new dishwasher was dropped off at 0910, not bad for the 7-11 delivery window. I got busy removing the old dishwasher and installing the new. Unfortunately, the water fitting was totally different so I had to make a shopping run. I fiddled with it until after 2pm. I tried to load the old unit in the little car but it wouldn’t fit. I’ll have to get it with the Jeep or put it on the roof of the little car tomorrow. I looked at the gutter sump level and it wasn’t very full so fixing the pump can wait until tomorrow as well. I copied the user info for the tenants and picked up my late lunch at La Victoria. I started home a little after 4pm and immediately, the freeway became a parking lot for all lanes. This was the third time this happened today. Twice it happened on Tenth Street when I went shopping earlier. Fortunately, it finally cleared and I made it home. I tied a piece of plywood on the roof of the little carr to bridge the crossbars for the dishwashers ride tomorrow. 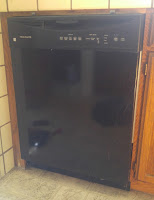 On the left above is the bottom of the new dishwasher. I never got a photo of the new one installed. The old dishwasher is on the right.

Wednesday: (02/28) I made eggs, home fried potatoes and pork strips for breakfast. Lou and Dawn were off to an appointment in Santa Clara and shopping. I was off to San Jose. I loaded the old dishwasher onto the top of my little car. The plywood bridged the bars and this time it was a go. I replaced the bad GFI outlet on the front of the house that feeds the sump pump. It was broken when the tenants plugged something in. There was no damage to the pump plug but I did replace it with a right angle plug that fits inside the closed cover. I suspect that either water got into the old outlet or that it broke when something was plugged into it. The plug of whatever was plugged in would have been melted. The existing cover was replaced with a weatherproof cover that closes over the plugged in devices. It is also capable of being sealed but I didn’t have a lock or tie wrap to seal it with. I will probably do that later and mark the cover with a warning it is for use only for the pump. If the pump doesn’t run because it’s left unplugged, as it was, then the front of the house will flood and the pump may be damaged. 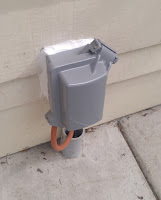 The old dishwasher loaded on top of my little car. On the right above is the new outlet and cover for the sump pump.

With all that accomplished, I was off toward home about 1130. I stopped for some egg rolls at the House Of Egg Rolls in Santa Clara. I also picked up some things at the Santa Clara Sprout’s Market. At home I put away things from the car and stowed the old dishwasher in the tent in the backyard. It may be repairable by fixing the diverter valve. Something to do later. For dinner we, all went to IKEA. We also picked up a mirror for the RV bathroom door.

Thursday: (03/01) I spent the morning inside, out of the rain. About 1100 I started working in the RV. I made a template for the two side panels of the old TV cabinet. Sounds simple and it only took two attempts but a lot of trimming and fitting. The problem is there is no straight side and it has to fit within the curved front dome. I also ground out two bolts and two loops that helped position and hold the old TV to the bottom metal plate. Grinding them out caused a lot of metal dust around the front of the RV in spite of my attempts to contain it. I then spent a lot of time vacuuming and wiping up the dust. I was joined by our neighborhood cat, Hobbs, who enjoyed a nap on the couch until I started grinding. Lou made a baked egg casserole for breakfast. We had BBQ ribs with baked potatoes and asparagus for dinner.