Wednesday: (04/04) I made the mistake of mentioning to Lou that on my three most recent hikes I have become winded very quickly, not my norm. She made me make an appointment with my new Kaiser doctor which was to be 1500 today. Granola with diced apple for breakfast. We went out to lunch at Panera Bread then took a walk around Mountain View until my appointment. I just changed my primary doctor at the recommendation of a friend because my long time doctor is leaving Santa Clara where I have been going and moving to San Jose. Since I’ve wanted to use the closer clinic for a while anyway, and didn’t want a longer drive, I changed to the Mountain View clinic. That was two days ago and today I’ll be seeing the new doctor. Good choice, as it turns out. No problem found but more tests to follow. Otherwise today we were busy finalizing our preparation to leave. About 2000 we finally hit the road. We waited until after the commute traffic died. We stopped for the night at the Bradley Rest Stop near Camp Roberts just north of Paso Robles. 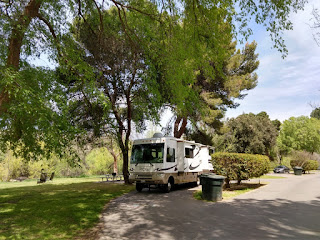 Thursday: (04/05) Apple for breakfast then on the road from the rest stop near Bradley. We stopped for gas in Paso Robles then on to Bakersfield on Highway 58. The morning sun heading Eastbound was interesting, but not unmanageable. We continued through Bakersfield out to the Kern River Campground by Lake Ming arriving about 1030. We selected site 44 and registered for four nights. We’ll probably be here longer but will have to change sites on Monday due to this side of the campground being closed for watering. Lou prepared grilled cheese sandwiches for lunch. We had an afternoon treat of popcorn. We enjoyed relaxing in camp all afternoon. In the evening at 1800, we met my cousin Judy and her husband Don and their friend Pat at the Rice Bowl for dinner. We visited there after eating and headed back to the park at 2000. 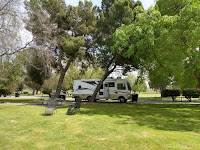 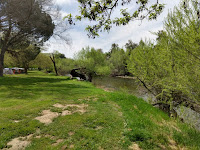 Our campsite and the river next to it.

Friday: (04/06) I was up early at 0600. I enjoyed a nice morning hike along the river this morning. Saw an otter in the river. Worried about fallout as geese flew over my head. Enjoyed a cow's aerial act on the bluff above the river. Who would think that that lone bush on the edge would taste so good? The trail consists of single track dirt and some paved bike path and then dwindles into a fisherman's trail. I enjoyed a nice sunrise over Lake Ming as I started my hike. The Kern River may seem calm but is not. 280 people have died in it since 1968. Last year three died on memorial weekend and 24 others needed rescue. No swimming for me today. I had to hurry back to camp and we headed off to Milt’s Restaurant to meet Lou’s friend Anita for breakfast. After breakfast, we stopped by at Anita’s house and picked up Lou’s electric scooter which Anita had borrowed. We then visited Camping World so I could redeem a coupon that will expire soon. I needed a new cable entrance door and a new 15a to 30a adaptor. We then returned to camp for a nap and leftovers for lunch. I continued to relax at camp while Lou and Dawn visited some thrift stores. They called to say they had dinner out so I had a chicken pot pie at camp. 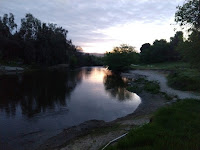 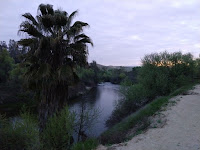 The river in the morning. 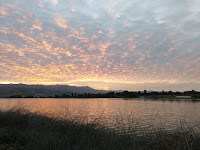 A nice sunrise over Lake Ming. The calm river on right. 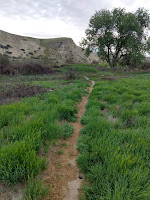 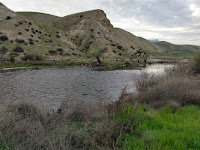 Trail East of camp by river. 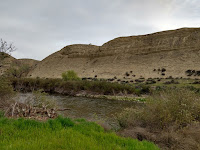 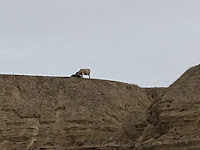 Above left top center is a cow on a cliff. A closeup is on the right.

Saturday: (04/07) We started the day with a short drive to the other side of Lake Ming where I had seen the beaver/otter yesterday. It was threatening rain and Lou and Dawn were wearing their rain jacket. I wasn’t as it started to sprinkle I returned to the car to get an umbrella. While I was gone they got their view of the beast. Dawn even got some video. We’ll probably be back tomorrow. We then went off to breakfast at Noriega’s Basque Restaurant. Great Basque family-style breakfast of thick bacon, homemade sausage, pork chops, an omelet, salsa, French fried potatoes, sliced cheese, apricot jam, and bread. I did my best. Lou and I then went shopping and Dawn went to a used bookstore. We got back to camp about 1500 and relaxed the rest of the day.

Sunday: (04/08) I took a morning walk while Lou and Dawn took showers. I walked West toward Hart Park and did a loop around the park. I enjoyed observing the feral cats and peacocks. I also watched some Frisbee golfers finish their round. Interesting to see a guy with frisbees pushing a golf cart. Most of them just have a backpack with their frisbees and markers. I got to do a little of the trail on the bluffs. Lou and Dawn picked me up after my 4.7-mile walk. We then took a drive out Round Mountain Road which circles North CW through some oil fields. About 10 miles out we came upon a guy walking carrying what looked like a gas can. It wasn’t It was a portable battery jumper. Unfortunately, it’s battery was dead like his truck battery. We couldn’t see his truck. He said it was down a hill. Since we didn’t have jumper cables we tried to charge his battery with ours but I don’t think that worked at all so we cleared a seat and drove him back to his truck which was down an old oilfield road and up a 4x4 road. He found a rope so we pulled his truck up to the main road. We had just arrived there when a pickup came by and we flagged him down. He had one of the tiny lithium batteries with jumper clips on it. After a few attempts the truck started and we were off to continue our drive. We came out to Granite Road which brought us back to North Chester Avenue. We did a little looking around at where the new Highway 58 Freeway is passing through my Aunt Helen's neighborhood. We also took a look and my Mom’s old house. It was then time to pick up Anita and we went over to the Pyrenees Basque restaurant for dinner. After dinner, we return Anita to her house and we returned to camp.

Monday: (04/09) I took a shower in the park shower which provided unlimited perfectly hot water broken only by having to push a button every minute. We broke camp, took care of tank duties and headed over to Milt’s restaurant for breakfast. Lou and I shared tamales with chili verde and eggs and Dawn had biscuits and gravy. We then hooked up the Jeep and headed out Highway 58 to I5 then onto Highway 43 toward Paso Robles. We stopped in Chalone at Jack Ranch Cafe where I took a nap and Lou and Dawn found some great pies in the cafe. I wasn’t feeling well. From there we headed on to Highway 101 South to Pismo Beach. We didn’t have reservations and were lucky to find a spot at Oceana County Park for 8 days. We found our favorite North Beach CG was closed due to flooding. We settled in and had leftovers for dinner.

Sunday: (04/15) We relaxed at home most of the day. I did take a walk through the dunes and farm fields of Oceana for about five miles today. Leftovers for breakfast. Clam chowder for lunch. Broccoli with wieners and a baked potato for dinner. A sunny but brisk day with some wind.
Posted by Don Wood at 9:14 PM