Applied for My PCT Hike Permit

Tuesday: (05/01) Lou and I did the grocery shopping first thing in the morning. She left me at the market and I took a walk and spent some time watching the construction projects along the way. At home, I worked on the computer, did some projects in the shop, and applied for my PCT hike permit. Lou made a reservation for us in Eureka for next week. A problem with not planning ahead in the summer is that there are no campsites available on short notice. I had a breakfast burrito from A Good Morning restaurant. Dawn made some pudding for lunch. I made some Spanish rice with bell peppers and pork strips for dinner.

Wednesday: (05/02) I picked up an apple fritter at Happy Donut on my morning walk. I walked out to the Bol Park path and visited the donkeys. I got most of my daily walking goal completed. I attended a Webinar and had a shower before lunch. I had a sauerbraten and cheese sandwich for lunch. After lunch, we went out shopping on the way to my dentist appointment. All is good. Now just have to wait three months to actually get the tooth installed onto the stud. That appointment in the first week of August which affects my PCT hike so I will need to adjust my hike such that I can get back for the appointment then return to finish the hike. So, the current plan is to hike from Independence to Tuolumne Meadows then return home. After the tooth is in I’ll return and hike from Kennedy Meadows to Independence to finally finish the full PCT hike. We had leftover sauerbraten on baked potatoes for dinner. 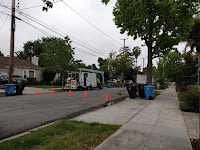 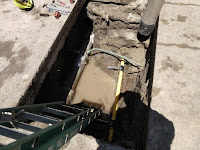 Thursday: (05/03) Granola and banana for breakfast. I started off with good intentions to get my miles in first thing. However, a city crew was out front and they were going to repair a water leak in the street. That developed into rupturing the gas main. It happened just before noon and was bad luck for the Chinese restaurant on the corner but at least an inconvenience to 45 other customers that lost their gas and water for the day. Everything was restored by 1500 but the gas crew of 4 techs was busy until 2000 testing and relighting water heaters, etc. Our water leak crew of four turned into an underground repair crew of 13 plus the crew of 4 relighting. After things were restored, I finally had some of my Spanish rice for lunch. I then took my walk finishing about 1900. Lou was busy with an appointment, shopping and getting the Jeep washed. It looks different without the dirt, mud and scratches through the dirt from our weekend at the ranch. More rice for dinner.

Friday: (05/04) I was busy in the yard and garden all morning. I finished tilling the garden and added some manure. We had lunch at the Menlo Park Senior Center. Pretty good grub for cheap. I washed the RV and little car then tinkered in the RV. For dinner, we met all the Hackmans at The Cheesecake Factory downtown. Dawn Hackman is in town for a visit. Lou and Dawn then went to San Jose for a quilt show. They met an old neighbor girl at the show. 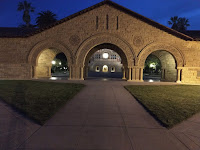 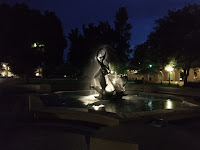 I walked home via the Stanford University campus to get my 5 miles walking in.

Saturday: (05/05) Lou and I were off early to an appointment. After that, we stopped by the Country Inn restaurant in Cupertino. Love their Swedish pancakes! Of course a short visit to the nearby thrift store before heading home. I collected tools and materials for a visit to San Jose. There was a leaky faucet in the backyard and I wanted to fix it before we leave. We also tried to fix some missing grout but an upcoming party would likely ruin it so we’ll do it later. The faucet was just to replace the valve stem packing on two valves. One went fairly quickly, the other took nearly an hour. It just wouldn’t start on the threads to reattach the stem nut. At home, we worked packing to leave. Lots of leftovers for lunch and dinner. I had to go to REI and get more socks so I can leave the RV fully stocked. I drilled a hole in the electrical panel door so that it can be opened more easily. It doesn’t have a handle and one would cause difficulty anyway. The hole allows it to lay flat against the floor.
Posted by Don Wood at 11:57 PM