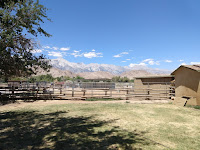 Sunday: (07/01) We stopped for breakfast in Bishop before continuing South. On the way down, in Lone Pine, I drove Lou up to the trailhead at Horseshoe Meadows, where I would be coming out (So I thought). We stopped for gas and lunch at a quick stop just south of Lone Pine.

Then we continued down to Kennedy Meadows Lou and Dawn dropped me off at the Kennedy Meadows Campground (MM704), then dashed off. I discovered my back belt had shrunk 3 inches since my last outing. Departed on the trail from KM at 1400. 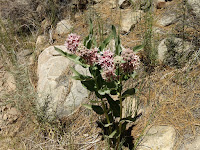 I'd never seen a flower like the one on the right, a ball about 4 inches in diameter. 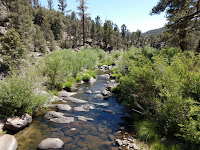 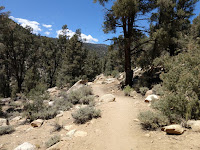 The South Fork of the Kern River above left. 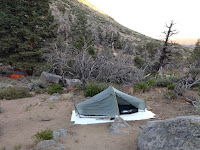 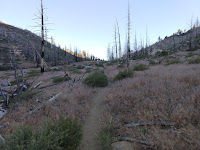 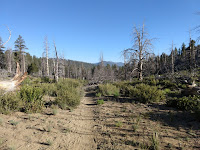 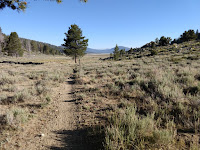 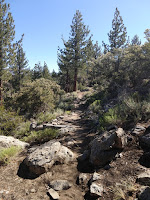 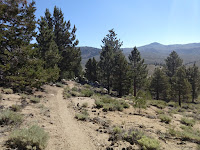 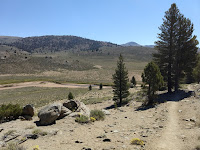 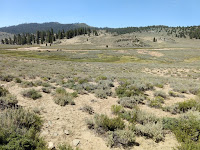 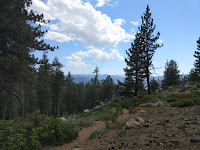 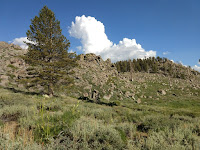 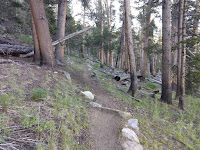 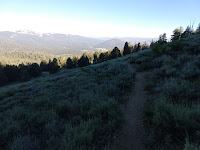 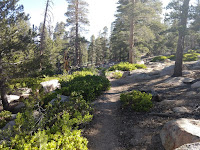 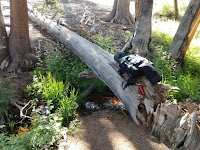 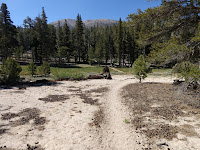 I saw the above left boulder that looked like a snake or turtle. 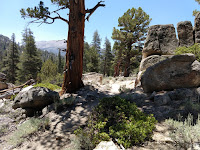 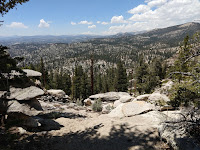 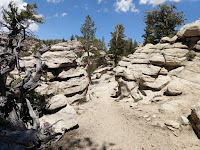 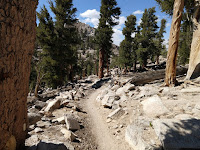 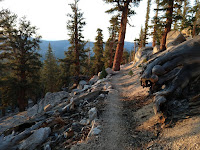 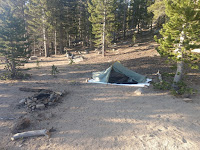 PCT Hike, MM742 - MM744
Wednesday: (07/04) Up 0630, on trail 0730. The trail wasn’t as bad as I expected to get to my exit trail. A girl (Dusty?), that I met about 1730 when I was cooking my dinner, passed me about 0830. She had camped one spring back. I had mentioned I’d be camping at the next waterhole but my guide didn’t show camping there, just water and it was 3/10 a mile off the trail so I had continued on. I stopped along the way to satellite text confirmation of my arrival time at 1030. Last night I estimated my arrival at 1100. As it turns out, I had exited at MM744 at Mulkey Pass. That trail trudged down a steep loose rocky trail then a mile of sand trail, all to arrive about ¾ of a mile from where I arranged to meet Lou. I had a ranger check my permit when I arrived. Surprisingly, she advised me I had to exit at Tuolumne Meadows within 30 days. That puts a kink in my plans to take a week off for a dental appointment. Lou had not arrived by noon. The ranger said she’d look for her at the Cottonwood trailhead I should have come out on. She was there. When she arrived, she had two hikers with her that she picked up in Lone Pine. The ranger also required that I return to the trail by 7/6. We stopped in Lone Pine for lunch. On our way back to Bishop, we drove up to where she’ll pick me up after the next section. Should work better since there are no turns, only one option at the end of the road. At Onion Valley, we picked up two brothers (Commando and Mohawk) and brought them up to Bishop to their motel. Time to do the wash and dry my tent. I awoke to a bunch of condensation this morning. First time so far. Laundry done, tent dried, starting to organize for the next pack load. A very good dinner at the casino. We tried to drive to the airport to watch the fireworks but it was $20 to see it and the entire town had “No Parking” signs on every street. We found we could see it best, standing in the middle of Hwy 395 in front of our RV park. 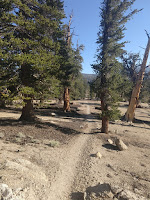 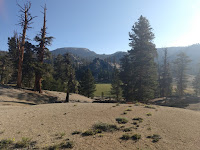 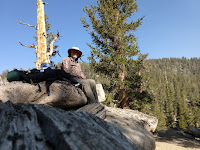 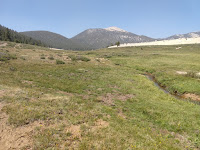 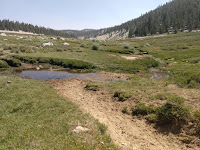