Saturday: (07/14) Leftover Amigos Mexican food for breakfast. We scooted down to the Kearsarge trailhead. I was on the trail by 0810. The climb up wasn't as bad as I dreaded. Once back on the PCT, I met a hiker named Alec (SOBO) from Philadelphia. He wanted to hike together because he needed a slow hiker. So we did. We hiked over Glen Pass then camped at Rea Lakes. Camped at MM793.5. Only 12 miles hiked today. 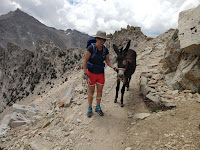 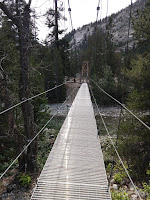 Monday: (07/16) Up at 0530, on trail 0645. The climb up Pinchot Pass wasn't bad. I met an older man with his son from Palo Alto. I also crossed the South fork of the King's River. My afternoon and evening were spent climbing over Mather Pass. I stopped for the night just before 2000 once I cleared all the rocks and saw a flat unvegetated spot. Camped MM818. 14 miles hiked. 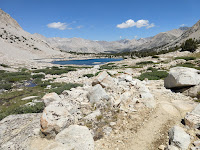 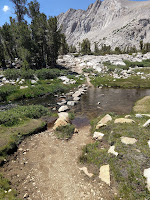 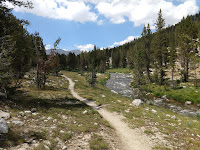 Tuesday: (07/17) Up at 0530, on trail 0640. A strenuous hike down from Mather Pass which included the Golden Staircase. I took a 30-minute nap after the stairs. When I returned to the trail I met Alec, my hiking Buddy from before Pinchot. We hiked on to Big Pete Meadow Camp. Alicia, Andrea, and ???, Invited us to their campfire. Simon, a hiker I met near Forrester Pass joined us. Camped at MM832 for 14 miles hiked today. 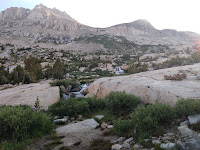 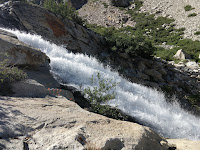 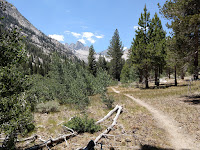 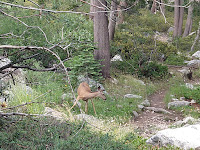 Wednesday: (07/18) Up at 0530, on trail 0645. Climbed up Muir Pass six miles. There are a couple of nice meadows along the way with the King's River meandering. Everywhere else the river is rushing and falling. Nice weather and scenery at the top. I had s good lunch then started down. I shouldn’t have mentioned the nice weather. It started to rain and hail for the next four miles to Evolution Lake. I camped at MM845.5, 13 miles hiked today. 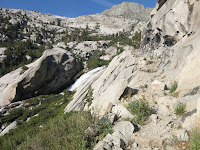 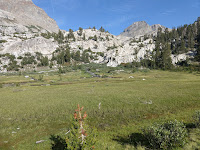 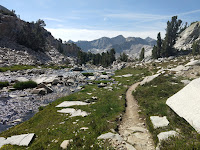 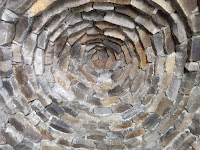 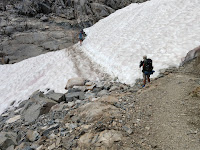 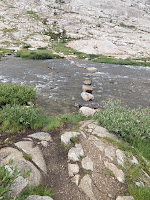 Thursday: (07/19) I walked through some pretty areas today. I had to wade across two creeks today. One was Evolution Creek, which puts most rivers to shame. I camped at MM860, a mile N. of Muir Ranch where I had stopped to get my resupply bucket. I headed toward Vermillion Valley Ranch. Alec caught up to me after the Evolution Creek crossing. 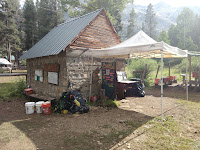 Friday: (07/20) Up 0530, on trail 0645. A climb up to Selton Pass with good views. Lunch at the top then downhill the rest of the day. I had to ford Bear Creek. I did it barefooted this time. Nice to have dry shoes but I tended to fall backward? It started to rain before 1600 and didn’t stop until 1830. I set my tent up during the rain and camped at MM873. Only 6.5 miles to Vermillion Valley Resort, my next resupply. 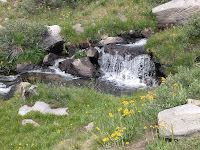 Saturday: (07/21) Up at 0530, on trail 0645. A 1000 foot climb over the mountain, then down even further to Edison Lake. Unfortunately, I arrived an hour late for the morning ferry. If I'd have remembered, I would have gotten up earlier. 6.5 miles to here to wait for the 1645 ferry. I took the time to dry all my things, then set my lounger up for a nap. A 19 person group had scheduled a ferry trip of their own for 1530 pickup. Fortunately, the captain allowed the 15 hikers on board too. There were a few hikers left for the 1645 run. Unfortunately, that run didn’t go because the weather turned bad. No lightening allowed on an all metal boat. I was lucky to not have to spend the night there. I started a tab at VVR, set my tent up, enjoyed a BBQ ribs dinner, collected my resupply, enjoyed a free drink, and relaxed. I camped off trail and a boat ride away at MM879 Vermillion Valley Resort by Lake Edison. Dinner of BBQ ribs, baked beans, a cobbet of corn, potato salad, and jalapeno cornbread. When I awoke at 0139 the campfire was going and s half-dozen loud talking people remained by the fire. During dinner, we had a heavy rain and hail storm. It put out the BBQ fire and some folks had other things for dinner. Glad I was first in the restaurant.

Sunday: (07/22) Awake at 0530 but the restaurant doesn't open until 0700. Nice breakfast burrito and cream cheese donut. I caught the 0900 ferry. Once at the far end of the lake, I dried the tent and washed and dried the footprint. I was finally on the trail about 1145. Beautiful area. There was a great waterfall along the tough climb up to Silver Pass. I camped just below Silver Pass at MM886.

Monday: (07/23) Up at 0530 and on trail by 0645. Today was supposed to be mostly downhill but there was a 1000 foot and couple of 500 foot climbs. When I was past the worst of the climbs I checked the time and distance to Reds Meadow (MM903). Even though I wasn’t supposed to get there until late Tuesday I decided it was worth the effort to speed up and try to get there before the last shuttle bus. I hiked 21 miles and arrived at 1850 and the last bus departed at 1910. I couldn’t reach either Dawn nor Lou by phone, a problem of never ringing the other party. A lady on the bus offered dinner and a place to stay while I waited for Lou and Dawn, who were expecting me tomorrow. She provided a nice pasta and meatball dinner and I answered all her questions about backpacking equipment and the trail. I eventually had reached Lou and they were on their way but I never got the agreed call about their arrival in Mammoth. Eventually I called them and they had been trying to reach me, but of course, the phone never rang. Verizon service is terrible. Since I didn't know the address of the condo I was at, nor did the lady, I had arranged to meet Lou at Von’s Market a few blocks away. We got home a little after 2230. 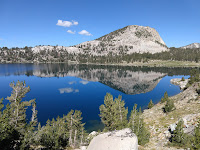