Saturday: (03/02) We had leftovers for breakfast. I scheduled our first Lyft ride. I checked and Lyft was only ⅔ the price of an Uber ride to downtown. We were dropped off near the Central Grocery and Deli and Dawn and I shared half of a muffuletta sandwich. At just ¼ of a sandwich eah we were still both stuffed because the whole sandwich would have been 12” diameter and 2 inches thick. We then explored part of the French Quarter before making our way to Canal Street to watch much of the Tucks Krewe parade then the Endymion Krewe. That kept us busy until after 2200. We called our driver and returned home. It would have been nice to spend some time on Bourbon Street, but, there were literally wall to wall people in the street, and we had so much swag from the parade throws that we could barely carry it. Dawn intends to use the beads in her crafts. We had some burgers and fries from McDonald’s for dinner as we watched the parade.
(GPS: 30.0248281,-90.0346937) 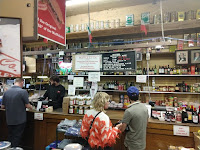 Alligator on the menu. The old Central Grocery and Deli, home of the original  muffuletta sandwich. 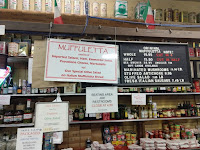 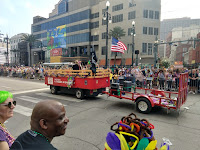 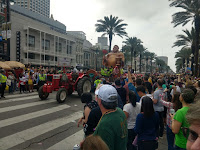 We watched the Tuck and Endymion Krewe parades. 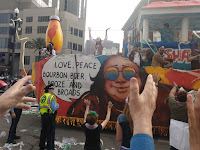 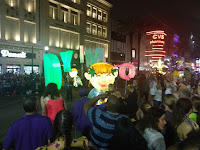 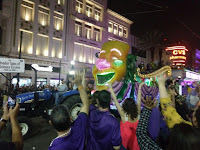 The weather was pretty nice.

Sunday: (03/03) Lou made pork chops with home fried potatoes and eggs for breakfast. We watched a movie in the resort activity room about hurricanes and the bayous. We had a fairly nice morning but the afternoon had high winds and rain. Not great for the parades today. We opted to not go downtown to see the parades, We did take a drive through the neighborhoods and eventually arrived at a big mall and had lunch there. We returned  home later in the afternoon. Lou and Dawn had crawfish stew for dinner, I had ramon noodles and wieners for mine.

View from our bedroom window.

Monday: (03/04) I made pancakes and sausage for breakfast. We headed off early to go to the Post Office to get our mail. Just when I thought the Post Office was getting their act together they prove me wrong. The package arrived Saturday per their website , when I checked it. That part is good. The bad part is that many Post Offices, seemingly on their own prerogative, limit the hours and set special times for General Delivery pickup. No info about those particulars are available online. The limitations, in most cases, seem to only be in place to discourage use of General Delivery. Here in New Orleans downtown location the hours are 0600 to 1000. I arrived at  1015 today. There were three clerks in the main windows with no customers. General Delivery was only supported at a tiny window at the opposite end of the building. Is it just me or shouldn’t they be able to handle General Delivery at the main windows at all open hours like many other offices. I know, but continue to test out the use of big city Post Offices for GD which is so often not recommended by reviews. We will return tomorrow. We then went to Costco to get more blue towels. They have the best price. We then returned downtown, found a parking place about three blocks from Bourbon Street in the French Quarter and walked around there. We had lunch at and Irish Bar courtyard on Bourbon Street. We shared jambalaya, red beans and rice, and another muffuletta sandwich. We finished up our walk about 1700 and returned home for grilled cheese sandwiches for dinner. A cold and breezy day today. 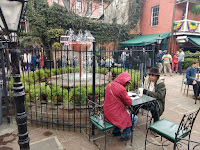 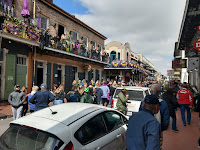 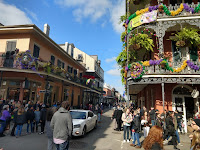 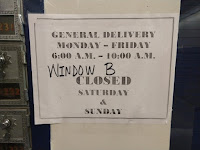 Tuesday: (03/05) We headed off early to the Post Office downtown. I picked up my mail package and we visited the Walmart store where Dawn was looking at pants, then we returned home. I made corned beef hash and eggs for breakfast. We then headed off to a couple of thrift stores where Dawn did find some pants that fit. We returned home and Dawn and I did the laundry. If it were not so cold I probably would have gone down to the French Quarter for this Fat Tuesday celebration. Possibly we're smarter in our older age so we didn't go and didn't freeze. Maybe in another year it will be warmer and dryer. We had leftovers for lunch and some stew dawn made for dinner. 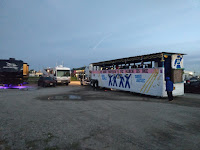 One parade float came from our RV park. It unloaded by our RV.

Email ThisBlogThis!Share to TwitterShare to FacebookShare to Pinterest
Labels: Louisiana