Tuesday: (04/02) I walked over to the office and paid for four more days here. Lou made ham and eggs with potatoes for breakfast. Lou then reviewed our tax return and I printed and eFiled our tax return. Our oder problem seems to be better today. We had leftovers and a ham sandwich for lunch. After lunch we drove out to St Mary’s and toured the Submarine Museum and looked about the old town area. We walked around an old cemetery as well, met an interesting caretaker who told us about some of the history of the cemetery.  Back at camp we had more leftovers for dinner. After dinner we did our laundry and enjoyed a campfire with several other campers. We learned about the history of this RV park and its owner. 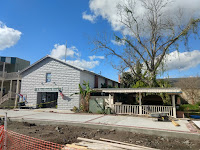 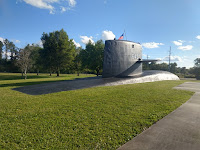 The submarine museum in St Mary's and a large submarine statue at the real submarine base. 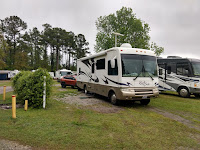 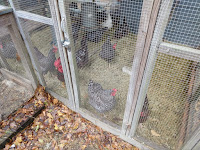 A couple of pot bellied pigs at the park and some chickens.

Wednesday: (04/03) Granola with diced apple for breakfast. We took a walk around our campground in the morning. Eventually I had to get to work. I removed the toilet and checked for problems. It looked like the rubber gasket between the toilet and the flange was possibly not sealing tightly. I also sprayed the foam insulation into the wall where the vent had the draft. Then i needed to get parts so about noon I headed off to town to get a couple of things for the toilet fix. On the way I stopped at China King for lunch, the best egg foo young I’ve ever had. Then I picked up some things at Lowe’s. I needed a gasket for the bottom of the toilet and a valve and hose for the water to it. When I returned I determined the parts I got for the valve were wrong. We don’t need it anyway since we use the toilet dry with a spray bottle instead. I also trimmed up the gasket I bought to fit and reinstalled the toilet. I also reinstalled the wall panel I had removed when my foam cured enough. Lou was busy removing the tinting film from the driver and passenger side windows. Turns out we both needed some Goof Off to remove the sticky residue left by her film and my foam overflow. We returned to Lowe’s dropping Dawn off at the library on the way. By the end of the day we were back to normal in the bathroom. Lou made seafood salads for dinner. In the evening we joined the camofire. 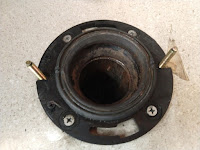 Thursday: (04/04) Leftover Chinese fried rice with cheese for breakfast. We were off early to drive up to Savannah, Ga for the day. We rode the free trolleys and river boats and walked the streets looking at houses, plaques on statues and monuments, and visited the Colonial Park Cemetery. We had lunch at the Moon River Brewery. My broccoli soup was probably the best I’ve ever had. Because we drove over 217 miles to do this we arrived home well after dark. Nice day. Good weather, good time. We stopped on the way home and bought a wheelchair for Lou. 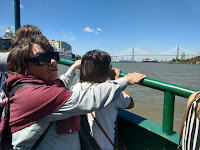 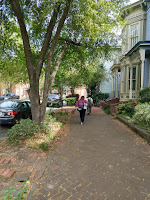 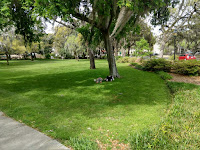 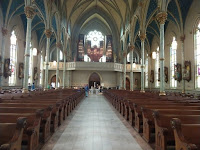 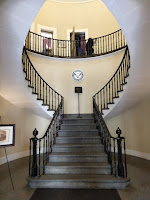 Friday: (04/05) Leftovers for breakfast. Ham and cheese sandwiches for lunch. Chinese food for dinner. Pretty much just relaxed at home all day. I visited Lowe’s and bought a sheet of plywood and had it cut to make a platform for the wheelchair in the rear of the Jeep so that it is stored at the bottom of the rear compartment and everything else sits on top of the box.

Saturday: (04/06) Breakfast at the RV Park clubhouse. Nice loquat pancakes and sausage quiche from eggs laid by the park chickens. Fortunately for the two park pot bellied pigs, the sausage was not home grown. I spent the morning assembling the box for the Jeep luggage area for the new wheelchair. It fits nicely though it does reduce the storage available for other things. We headed off about 1130 to try to get to a farmers market in Kingsland. It turns out it is a real farmers market held in the pavilion at the tiny park there. When the farmers have something to sell they show up there and sell it. Nobody there today. We did look around an estate sale nearby. All this made us hungry so we stopped for lunch at Cracker Barrel. Then we stopped off at home and dropped off leftovers then headed off to Woodbine to look around. We took a walk by the river there. Then more driving around. We stopped in St Mary’s to look at a couple of new model homes. And then a visit to Walmart before heading home. Leftovers for dinner. 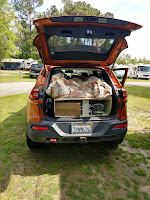 The wheelchair box in the Jeep. 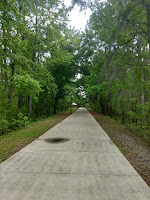 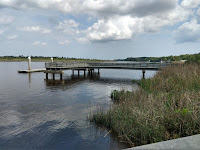 A boat launch, pier and trails in Woodbine.

Sunday: (04/07) Lou made salmon hash and eggs for breakfast. We drove about 25 miles North to Jekyll Island for the day. We took the tram tour of the Historic District and then took a walk on the beach. Today was the inaugural trip for the new wheelchair. It worked well and the storage box worked well, as well. Well, Well. The island was foggy all day so no great views.. We had lunch at the Wharf restaurant. Another shopping visit to Walmart to get water and a bike lock for the wheelchair. Lou made chili for dinner. 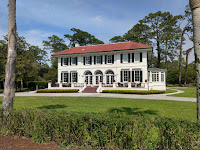 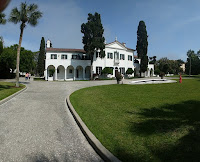 A couple of the "cottages" on Jekyll Island. These were only for occasional use. 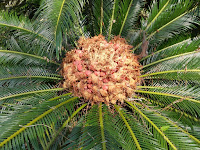 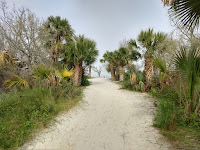 Sago palm fruit? and the trail to the beach. 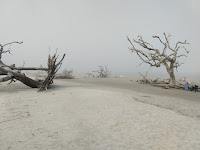 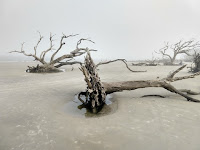 Interesting ghost beach on the island.