Welcome to our site. We’re Don Wood and Lou Manners.

Our first RV was a 1968 VW camper made by Concord. This camper was unusual because it had sliding doors on both the left and right. I bought it used in 1973 and put about 250,000 miles on it. The highlight trip was in 1979 when we took a six week trip around the states. We took our two dogs and went north from San Jose, California to Vancouver, Canada; East to Montana; Wyoming; Colorado; South Dakota; Chicago; Rochester, NY and Niagara Falls; Boston; New York; Atlantic City, New Jersey; Philadelphia; Washington DC; Mammoth Caves; Nashville; Miami; Key West, Kansas; and Las Vegas. We left Key West Florida with two days left of our vacation and with short stops in Kansas and Las Vegas we made it back on time, 24 hour team driving. This trip may sound a bit rushed, but it was actually relaxed.

We tent camped from about 1987 until this year (2003). This was fun but airing up mattresses and pitching tents isn’t as much fun when you’re only spending one night or when it rains.

In May 2003 we acquired a slightly used 29 foot, 1999 National Sea Breeze Class A RV. We had been attending RV shows and studying RV’s for a little over a year before taking the plunge. We consider this our trainer and hope to use it for a few years then move to a larger model and possibly go full-time.

We wanted to be able to get around without breaking camp so we equipped our car for towing. We have a 1992 Volvo 240 wagon that we equipped with a Remco drive line disconnect, a Roadmaster Sterling towbar, and a US Gear Unified Brake System. The cost of the modifications probably equaled the value of the vehicle but we like the car.
After trying to destroy our Volvo on mountain roads a Jeep has fear of, we finally bought a Jeep in December 2010 we bought a used Jeep Grand Cherokee. 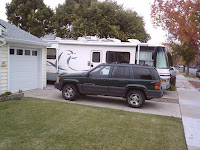 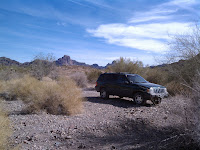 In February 2016 we had to replace our Jeep Cherokee because it was totaled in a rear-end accident.

In October 2017 we traded our Seabreeze motorhome for a 2006 National Surf Side 29 foot class A. It was in good condition and has slides for more room with about the same vehicle length.

Don retired June 2004, Lou in June 2005.
We plan to travel about six months per year taking several multi-month trips in the spring, fall and winter probably staying home much of the summer when everyone is traveling. We’ve put more than 20,000 miles on the RV in the past two years. We’re looking for a possible new home town where the cost of living isn’t as much as here in California, possibly where income and or sales taxes are less but mostly just a nice less crowded place to live.

Lou:
Lou (Lois) was born in Yakima Washington and later moved to Bakersfield. Lou attended East Bakersfield High. Lou is a real estate agent but worked for Palo Alto School District as a teachers aide working with special needs students until she retired in June 2005.

Don was a geek. Don was president of the Audio Visual Club at high school and worked as a stage hand and projectionist at the county’s Harvey Auditorium.

In 1969 Don joined the Air Force. He was stationed at Lackland AFB in San Antonio,Texas; Lowery AFB in Denver, Colorado; and at Sunnyvale AFS in Sunnyvale California. He worked as a satellite instrumentation technician operating the telemetry ground station.

He also worked at Moffett Field NAS as a projectionist at the theater.

Upon separation from the service in 1973 he continued to manage the theater at Moffett Field Naval Air Station and worked for the Cable TV company in Sunnyvale.

A few months later he went to work for the County of Santa Clara as a senior traffic signal technician. He became supervisor of electrical maintenance in 1985. His section was responsible for the operation and maintenance of traffic signals, a fiber optic network, building electrical, pump stations, and electrical inspection including the construction of a new Light Rail system. In 1996 he setup the Department’s website and acted as webmaster. He also worked on the development of maintenance management software used by his section.

In 1985 he setup a network for three PC’s that monitored traffic signal systems. That network evolved over the years from 3 to 40 computers using windows NT servers which he administered.