Monday: (01/30) Hard boiled eggs for breakfast. We were on the road to Fresno in the RV before 0800. A stop in Gilroy for gas at Costco, 54 cents less per gallon than neighboring stations. Then over the hill into the valley. We stopped at Lou’s niece’s house left the RV and she drove us to a Basque restaurant downtown for lunch. They visited and I napped after lunch. Next stop was the Book Barn in Clovis. We left town as it got dark stopping a few miles South at a rest stop in Tipton. 55 miles to Bakersfield tomorrow.
GPS: 36.109105, -119.323950

Tuesday: (01/31) Breakfast at Milt’s restaurant. We left The RV at Wal-Mart's and checked out The campground at Hart Park. Nice spot so we move The RV there. The day was spent visiting thrift stores. Dinner with Ernie, Cousin's Don and Judy, and Lou’s former roommate Anita at the Rice Bowl Chinese restaurant.

Wednesday: (02/01) Chow mein for breakfast. The house batteries were totally discharged again this morning. I think they have failed again. We headed off to Tehachapi in the morning via two-lane roads, not freeway. On the way, we stopped to watch a train pass by the Tehachapi Loop, One of the seven wonders of the train world. Lunch at a German bakery in Tehachapi. Lou and Dawn visited shops downtown while I checked out a couple of RV parks and the PCT Trail crossing on Willow Springs Road. I hiked through there last year and just wondered how the road was. Dinner at Albertson’s Market. We spent the evening at the open mike night at Fiddlers Crossing. Dawn told a story there. We got home about 2300.

Thursday: (02/02) Leftover rice, egg rolls, and shrimp for breakfast. Our morning was spent at the California Living Museum (CALM) next door but a mile by road from our campground. Quite nice. I really enjoyed seeing their condors and mountain lions. For lunch, We visited the Moo Creamery. Nice bacon ice cream. Then we went to Camping World to look at our RV’s and try them out for size. The current decision is the Winnebago Vista 29VE. Grilled cheese sandwiches for dinner.

Friday: (02/03) We started the morning with walks. Lou and Dawn were off before me and headed East on the Kern River Trail from camp. I left later and met them on the back side of Lake Ming on the paved bike trail about one mile out. I continued for another mile to the end of the trail while they headed back. I returned via a dirt path nearer the river making my walk about 4.5 miles total. After more leftovers for breakfast, we headed out. First stop was the Zoey Brookes Gluten Free Bakery in Oildale. A little thrifting by Lou and Dawn and I visited Harbor Freight to get a few tools. I had left my tool pouch at home. We met Lou’s friend Anita at Pyrenees Basque Cafe for dinner. After dinner, we went to Anita’s to meet her dogs.

Saturday: (02/04) Leftover Basque food for breakfast. While Lou and Dawn cleaned up, I took a walk West toward Hart Park. Nice walk. Lou and Dawn picked me up and I took them to a festival at the fairgrounds. We visited the Vallarta Market for some flan. Next stop, Beverly’s Craft Shop. Next stop, Barnes and Noble’s bookstore for Dawn. Then we returned to the park to sit by the river. Anita and her dog Charlie came over for dinner.

Saturday: (01/28) I headed down to Lowe’s in San Jose to pick up the rain gutter foam filters that I had ordered. They were supposed to be in on the 11th and lowe’s never called. They were in. I took them over to Dawn’s apartment to install later. Breakfast was a burrito from La Victoria Taqueria. Lou and Dawn were busy packing the RV. They also took a long walk. I spent some time cleaning up the shop. I needed to locate the extra bungee cords for the tent so Lou can replace some. I also filled the water tank on the RV. And fixed the gate lock. It needs adjustment for the deadbolt latch due to expansion and contraction of the mud under the driveway. I also drained the black and gray holding tanks. That didn’t go well. The macerator failed just before completing the black tank make for a messy cleanup to get the macerator off and replace the impeller which Ernie provided. A simple 30-minute job became a 3-hour job. Leftover casserole for dinner.

Friday: (01/27) Maple bar and a sausage egg and cheese English muffin for breakfast from L&L Hawaiian. I picked up Jessica and Hemmas and we headed up to Arastradero Preserve for an 8-mile hike then lunch at the Alpine Inn in Portola Valley. Nice hike, Not too much mud. Great views from the top. Jessica is visiting from Portland. She was one of the hike leaders until she moved to Portland. This is one of her hikes that she scheduled from Portland. I had a burrito and fries with some beer. I relaxed when I got home. For dinner, I used up all our stale corn chips and made a casserole with chorizo, black beans, peppers, onions and salsa all topped with avocado and swiss cheese. It was sort of like a super nachos but moister chips and less cheese.

Thursday: (01/26) Granola and banana for breakfast. I spent another day doing as little as possible. I drove Lou to an appointment in the afternoon and we did some grocery shopping. Dawn prepared green beans with baked fish and rice for dinner.
Posted by Don Wood at 10:26 PM No comments:

Wednesday: (01/25) Lou made fried sauerkraut potatoes with sausage and eggs. Lou and Dawn were off to appointments today. I was off for a hike at Pechetti OSP. Just as a short 7-mile hike. Nice flowing streams and waterfalls. Lunch at China Wok in Sunnyvale. I worked on our dishwasher. Lou reported that the center spray wand wasn’t moving. I cleaned the filter and confirmed nothing was plugged up. All good. Then I remembered it’s smart and the wands spray at different times. No problems. No dinner needed.

Self Serve Beer On Tap

Sunday: (01/22) A rainy day. PBJ toast for breakfast. Lou made salads for lunch. Dawn and Lou were off to a storytelling event at the Palo Alto Children's Museum. Dawn was one of the tellers. I was busy relaxing all day. Dawn made dinner, peppers, potato, broccoli, and sausage.

Monday: (01/23) A very rainy day, even some hail reported. PBJ toast for breakfast. I tinkered with the computer much of the day. We did some grocery shopping Crackers and cheese with summer sausage for lunch. We had dinner at the Crepevine in Mountain View.

Tuesday: (01/24) No rain today. Granola and banana for breakfast. We went over to Cupertino for a walk. Lou and Dawn then went to lunch at Hobee’s then to a movie there. I continued my walk. Then stopped later for lunch at a new place, Blast Pizza. Nice custom pizzas. I’ll definitely return, especially if their self-service beer taps are opened. They were secured due to a dispute with county weights and measures. Darn. I walked some more, then caught a bus. Had to transfer buses on ECR but stopped at Sprout’s Market in Sunnyvale for some of my favorite ciabatta bread. At home, the pork chops sauerkraut and potatoes in the crock pot were ready at dinner time.

Saturday: (01/21) Nice day with only a few sprinkles. Lou made sausage, eggs, and potatoes for breakfast. We were off to San Jose to walk in the Women Parade. Quite a big crowd. The park was full before the last of the marchers left City hall 8 blocks away and it was curb to curb people on that route. After the parade we had dinner at the Sweet Tomato Salad Buffet then went to Connielee and Terry’s place for a guacamole party. They have a huge avocado tree and they are ready. Some Dim Sum for dinner.

Tarwater Loop Hike In The Rain

Friday: (01/20) I prepared sausage, egg and cheese sandwiches for breakfast. I headed off to lead a hike of the Tarwater Loop Trail in Pescadero County Park. Only 6 of the original 23 hikers were interested in a rainy day hike. We enjoyed a nice hike with consistent medium to heavy showers which provided a nice show of overflowing streams waterfalls, and a surging river. Usually, very little water flow in the park. Leftover rice and sausage for a late lunch. Dawn made dinner.

Thursday: (01/19) Smoothies for breakfast. I lounged in bed all day tinkering with the computer and sleeping. Lou and Dawn were out rummaging and visiting libraries. Lunch was Sausage with Spanish rice. Lou made super nachos for dinner.
Posted by Don Wood at 10:14 PM No comments:

Tuesday: (01/17) Granola for breakfast. We were on the road around 0800. Managed to get lost in Tracy missing the connection to Highway 120. We turned off on Highway 4 later and set the Jeeps navigation system to take us to Yosemite. In Placerville, we knew we were off course and headed South on Highway 4I to Sonora to get back on Highway 120. We made it to Yosemite Valley about 1400. Had the opportunity to look at all the waterfalls. As it got dark we checked in at the Lodge. Dinner there. 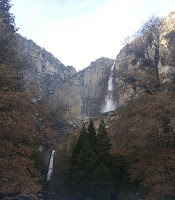 Wednesday: (01/18) Breakfast at the Lodge cafeteria. We drove out of the Valley about 0900 before the rain and possibly snow arrived. A stop at Mariposa for a walk in the Ace Hardware Store. We stopped for lunch in Merced at Rancho San Miguel Market. Then a stop at a bookstore in Modesto. Heavy rain since Mariposa and until we were over the hill into Fremont on Highway 680. We stopped for dinner at the Black Bear restaurant in Milpitas after a visit to a nearby thrift store. Home a little after 1900.