Tuesday: (02/13) I was off early to Orchard Hardware to get a thing I forgot on my visit yesterday. I also got a new GFI outlet. On my way home I stopped for huevos rancheros at Los Altos Taqueria. At home, I modified the new TV swing arm I made a couple of days ago. I needed to make the mounting plate an ⅛” shorter and both shorten and lengthen the arm. Seems odd but the arm hit the window valence as it swung back against the wall. In addition, the center of the TV bracket was ¼” too close to the wall. I ended up shortening the arm, adding a vertical piece of metal and then cutting off about ½” of the TV mounting plate which removed the two holes I had originally intended to use to mount it. The vertical piece of metal provided someplace to bolt two of the other holes in the bracket. Should work. It’s all painted now and drying. The second project was to be the GFI replacement that feeds the sump pump it’s been tripping when the pump runs. I installed the new outlet and the problem remained the same. So, I already had a replacement pump in the shop. I got it out to install. It isn’t the same as the old one primarily in the placement of the discharge. I headed off to the hardware store to try to get what was needed to connect the new pump. Three stores later and I had what I needed, not what I wanted though. On the way home I picked up dinner again at Lucky Chinese restaurant. Even though I had an hour of daylight left I opted to stop for the day and eat dinner. Between these tasks, I helped Ernie repair the drawer runners in his trailers built in dresser.

Wednesday: (02/14) Dawn and I went to the Los Altos Pancake House to get blintzes for breakfast. When I talked to Lou this morning she was making blintzes for Anita and herself. She said she is packing to leave tomorrow headed to Fresno to see her niece Rene. I cut and welded up the second TV wall mount. I found that one of the hinges I bought was the wrong size so I had to make a run to Orchard Hardware to get the correct one. With the mount cut, welded, ground down and painted, I got to work on the pump replacement. I put everything together and found I needed a PVC fitting so off to Orchard Hardware again. I finished installing the pump and testing it just as it got dark. Leftover Chinese black bean fish and five flavor chicken with Spanish rice for lunch. Chili size for dinner.

Thursday: (02/15) Granola and banana for breakfast. More tinkering on the TV mount. I drilled some holes and mounted the releasable mount to my arm and did some final paint touch up. Of course I made another trip to the hardware store to get some locking nuts. I also made a wooden rest for the far side of the monitor to help support the tv in it’s normal position. Dawn and I went over to Sweet Tomatoes for lunch. Lou left Bakersfield today and stopped for lunch with her niece in Fresno on her way home. Lou’s leg was bothering her when she got home so we went to the emergency room to have it checked. Dawn and I had dinner at Safeway market nearby then visited Grocery Outlet for desert fruit bars and, of course, found a few other things.

Friday: (02/16) PBJ toast for breakfast. I drove Lou to an appointment this morning. Dawn and I shopped around while we waited. We stopped for lunch at Togo’s sandwich shop on the way home. Back at home after tea in the backyard, I got busy pruning the blackberry bushes and weeding their flower bed. I also cleaned out the garden spot. I also put away some of the stuff collecting inside and outside the shop. For dinner, we headed out to Marie Callender's running into a traffic jam on the way. It was a three car accident that closed all NB traffic lanes right in front of Marie Callender's We had to sneak in through convoluted side roads. 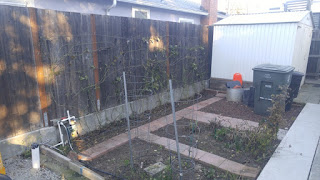 Saturday: (02/17) Lou and Dawn were busy with the laundry today. Dawn was busy with her book organization project. I tinkered on the RV a little. Lou and I visited Orchard Hardware where I got screws to attach some trim pieces on the side of the RV. We also got some more storage boxes for the new behind the TV storage space in the RV bedroom. I made corned beef hash and eggs for breakfast. Leftover hot and sour soup and peach pie for lunch. For dinner, we went to Blast Pizza in Cupertino.

Sunday: (02/18) Wow, a true day of rest. I slept until noon and never made an appearance outside today. Leftover hash and pie for breakfast. Baked beans, sausage and pie for lunch. French fries and roast chicken for dinner.

Monday: (02/19) Breakfast at Ann’s Cafe in Menlo Park. We then went on some errands and grocery shopping. I picked up some dim sum for lunch. Our tenant in San Jose called to complain that the dishwasher wasn’t working right so in the afternoon I drove down to check it. I found the middle and upper arms didn’t have water flow. There also seemed to be a slight squeal when it ran. After my tests, I had to reluctantly agree there was actually something wrong with it. We visited Home Depot, Lowes, and Best Buy looking at dishwashers. I eventually remembered that we had to be more selective with our choice because of the limited vertical opening. Dinner at Super Taqueria in Sunnyvale.

Tuesday: (02/20) Granola and berries for breakfast. I was off to San Jose to measure the counter then visited Sears, Home Depot, and Lowes looking at dishwashers. My research found only two manufacturers make units what are short enough. Frigidaire, like is currently installed, and GE. GE is actually the shortest. It is also what we have here in Palo Alto. I decided on a model and found the best price and it’s now on order from HD. It will be delivered next Tuesday. I spent a lot of time yesterday researching how to repair the lack of the upper arms moving and it can only be two things. The diverter valve or the pump. I couldn’t even determine that the washer we have even has a diverter valve nor can I find a wiring diagram. With so little info, the high cost of parts and the units age, I decided to replace. I want to disassemble the old unit and confirm that it is the impeller that is broken on the pump. That would mean that what should be a $3 part failure would require a $90 pump assembly replacement. I hate our disposable world. On the way home I stopped for lunch at Lucky Chinese restaurant in Mountain View. At home more online research then the ordering of the dishwasher. We all went to pick up a loaner wheelchair for Lou in the afternoon. It took five of us to figure out how to assemble it. I tinkered on the computer in the evening organizing my music files and updating my phones music. Wieners and sauerkraut for dinner.

Wednesday: (02/21) Dawn made and an omelet for breakfast. I was busy with tax preparation and a webinar in the morning. Leftover Chinese food for lunch. In the afternoon, I decided to proceed with the removal of the overhead front TV of the RV and install a more efficient LCD TV and the printer behind it with some extra storage as well. I visited Bestbuy and bought another Roku TV, a 32” model. I also did a little grocery shopping on the way home. At home, I removed the old heavy tube TV and started tracing the cables. There was a satellite system so there are lots of extra cables. Also, there seems to be a lot of spare cables going somewhere placed during manufacture. Lou was busy stocking the RV. Lou made stuffed peppers with baked potatoes and peas for dinner. 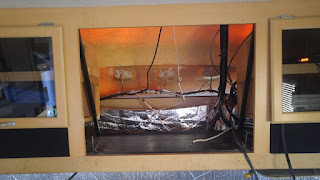 Thursday: (02/22) Dawn made grits for breakfast. I worked at the computer and tax prep much of the morning. Lou and I headed out to Kaiser to get a copy of my medical record for our trip. We had lunch at Lucky Chinese Bistro. I really like this place. We then visited three Lowe’s hardware stores trying to find nice birch plywood panels to build the new front TV cabinet. The first two didn’t have good enough panels to meet my discerning needs. The last in North San Jose had some nice ones. None of the three Lowe’s had the steel tubing I needed. I knew that our local Orchard Hardware had what I needed so we picked it up there. Then, on the way home, we did some grocery shopping at Sprout’s market. We picked up Dawn and then went to Grocery Outlet for more groceries. At home, I made my enchilada casserole for dinner.
Posted by Don Wood at 7:45 PM