Monday: (05/29) Lou made corned beef steaks and eggs with toast for breakfast which we enjoyed in the yard. We then worked in the yard gardening. I installed a new, additional timer for the greenhouse with three valves. Previously there was only one valve, which still exists, for all watering in the greenhouse. Now I can run soakers for really long periods and emitters for much shorter periods. In order to complete this project, I had to visit orchard hardware for some materials. I also cut the concrete slab next to Dawn’s building to be sure it separates cleanly. Lou made corned beef, pickle and cheese sandwiches for lunch. For dinner, we had beans and wieners.

Tuesday: (05/30) Another cool overcast day. Awakened early at 0730 by the dumpster delivery driver who was out front ready to place the dumpster. We had to dash out and move our cars that were protecting the site. It was placed by 0740, can’t work until after 0800 here in Palo Alto. After granola and berries for breakfast, I got out and got to work. I finished breaking out the concrete pad that was under Ernie’s shed, That along with the small amount of debris I cleared from under the base of the previous slab removal made around 4 cubic yards of debris so the dumpster is half full. Tomorrow I have to break out a brick wall around our front flower bed and some walkway in the neighbor's yard where I’m placing some new walkway. Lou brought home some pizza for lunch. He baked veggies with shrimp and BBQ ribs for dinner.

Wednesday: (05/31) Corned beef hash and eggs for breakfast. I broke out the concrete walkway that I’m to replace at our neighbor's house. The took much longer than I’d have liked because it had reinforcing wire in it and I had to remove it from the concrete. Then I removed the brick wall from our front planter. It presented a problem by trying to bury the front of the house presenting a termite problem. I intend to replace it with a walkway across the front of the house. Pizza for lunch. Dawn made lentil stew for dinner.

Thursday: (06/01) Some corned beef and a tiny bit of hash with a toasted onion roll for breakfast. I spent the day sawing the driveway. I still have a third of the dumpster available so I decided to cut out all the cracked concrete sections in the driveway so I can pour new concrete as needed like I did for the front walkway. I got it almost cut just two 4 foot cuts to go tomorrow morning. I did have to make a run out to Home Depot to get a new concrete saw blade. The new blade did make the cutting go faster. I quit sawing at 1700 then swept up the powder from the saw and washed down the driveway, RV, plants, and lawn. Lots of dust. Pizza for lunch and dinner. Lou and Dawn were out shopping much of the day and went to Dinah’s Motel to listen to the band there.

Friday: (06/02) Granola and berries for breakfast. I started the work day by doing to two concrete cuts left undone yesterday. I then spent the rest of the day breaking out the driveway concrete and filling up the dumpster. It’s about 95% full now. For lunch, I had a corned beef and cheese sandwich. Dinner was cottage cheese and fruit. In the evening we all met Courtney at the Stanford Theater to see the vintage movies “Harvey” and “Arsenic And Old Lace”.

Saturday: (06/03) I was off to a garage sale Lou pointed out. They were supposed to have some Dewalt tools. All gone. I then stopped by Los Altos taqueria for some Huevos rancheros for breakfast. After that, I visited REI and Best Buy for a look around. I was then off to San Antonio mall where I watch the construction project for a while. Then some shopping at Safeway, Trader Joe’s and Sprout’s Market. Finally, Home I tinkered with the RV removing 4 of the 6 batteries for a test. Also found the breaker tripped again. I think the Inverter/charger is bad or the batteries are causing it to trip. In the evening I ordered a new inverter charger, still looking for the batteries. There are only two batteries on Amazon but I need 3 so still looking. Most are not the same size as my existing so a new configuration is going to be needed. Lou, Dawn Meili, and Ping were out visiting all the garage sales in town/ Today was a citywide garage sale. Lou found a cast metal love seat bench for the yard.

RV battery hookup.
Sunday: (06/04) A visit to Home Depot to get another concrete blade that I should have gotten a couple of days ago. Breakfast at Chaves Market in Redwood City. Nice Huevos Rancheros. Then we visited the Los Altos and Sunnyvale libraries. Next a visit to a street fair in Sunnyvale. And finally a visit to the Mountain View Library. At the street fair, we had an avocado smoothie like thing for lunch. Lou got a chicken wrap for her lunch at Togo’s on the way home. Once home, I found that some James Bond movies were on one of the TV stations. That kept me busy all evening. Dawn made vegetable soup for dinner to which I added a hot dog sandwich. 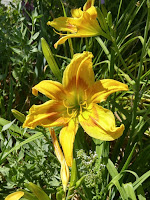 Monday: (06/05) Soft boiled eggs for breakfast. I spent some time measuring the areas that need concrete and trying to estimate the proper quantity of concrete bags and base rock needed. I don’t need to end up with too much. Lunch was a slice of pizza and a hot dog. Also some of Lou’s peanut butter cookies. I eventually made it outside. I check the battery that was charging and attempting to be desulfated. It had gone up from 13.1 volts to 13.4 volts but a 15 second load dropped the voltage down to 1.6 volts. So the batteries are bad. I laid some bricks and poured a concrete patch on the South side of the house. Both patches were made to repair leaky pipes a while (years) back. Lou made tacos for dinner.

Tuesday: (06/06) Lou made eggs and corned beef steaks for breakfast. I never got going well today. I did strip the form from my walkway patch. I also spent some time in the shop tidying up and extracting my power tamper from a back corner. It hasn't been used for several years so it won’t start now. Don’t need it today but do need it soon. I think I’ll defer to the professionals to fix it. I made a shopping run to Home Depot to get some rebar, dobies, and pipe. I also checked the base rock depth of the driveway. It’s less than two inches thick so it has to be dug out for at least six inches of base rock. The dumpster wasn’t swapped out today so maybe tomorrow will be a digging day. I received some packages from Amazon today. I got some drip emitter tubing which I installed on Lou’s garden planters in the greenhouse. I also received the new inverter/charger and temperature sensor. I got the remote panel yesterday. The batteries should arrive tomorrow. When I need a rest from digging and pouring I’ll install the new items. Lou bought a couple of pizzas on Twofer Tuesday at Papa John’s pizza for lunch. I also had some for dinner.

Wednesday: (06/07) Another abrupt start to the day. The truck picking up the concrete debris box and leaving an empty arrived at 0730. That means it’s a workday. I decide to go out to breakfast with Lou first. Then I returned some stuff to Orchard hardware and check at a small engine shop about getting the vibrator plate engine looked at. Once home I attended a webinar, I tried to get a reference from Harbor Freight as to where the engine might be fixed but was on hold for 15 minutes. They were occasional messages that their website might have information. They did. They had what they call “a user manual” W0w, an amazing help. Who would have thought? As it turns out I didn’t have to read the manual. After the index, there were four photos with labels of different features. One feature was an “On/Off” switch. I checked my machine and it had one too. And it worked. It was hiding on the front of the engine behind a wire. I told Lou so she can remind me a few years from now when I use the machine next. It was now almost noon so I had some leftover pizza for lunch. After lunch, I finally got busy digging. I scraped off whatever existing base rock was existent being sure not to get any of the clay soil with it. It varied in thickness from nothing to 4 inches thick. No need to haul it off, I’ll reuse it with a bunch of additions baserock. I need to remove about 4-6 inches of clay soil to get a good base.I did a small section, about ¼ of the area to be done for the driveway. My new batteries arrived and I met the UPS truck to get the batteries from the truck into my wagon. I didn’t want the driver dragging them to my door with all the usual kicking and dropping. I put them in the RV but will hook them up later. Dawn was off to her writing class in the morning, Lou off grocery shopping. Dawn went down to San Jose to another meeting with another writer's group in the evening. Lou and I went to dinner at the Palo Alto Creamery.

Thursday: (06/08) Lou made corned beef steaks and eggs for breakfast. The house down the street was having their walkways and driveways poured today. They did it in flagstone stamped texture. 33 yards of concrete. There were about 10 people working on the pour plus Ernie and I inspecting. A big job. I watched to learn. Their methods don’t always translate to my jobs. I work by myself so no way to do suck big pours. I do lots of little ones. In between inspections, I moved some dirt and baserock. Not too much. It sprinkled rain all day too. Never much so the concrete wasn’t affected. About 2pm I got a call there was a problem with the toilet in San Jose. I headed down and found it just a little slow so I crawled under the house to take the sag out that was identified a while back by the video camera plumber. I couldn’t reach one area to add supports. Too much girth. Sometime later I’ll dig out some more so I can get in under the drain pipe past a beam. After a shower, I stopped for egg rolls and also a milkshake for dinner.