Friday: (03/09) Off early for the train. Lou dropped me off at the station and I caught the 0717 train to San Francisco. I usually have no real plan for these walk-abouts. I walked uptown on Fourth Street then through Chinatown on Green Street. I stopped at AA Bakery for a nice bacon onion bun for breakfast. I continued out Columbus and on through Fort Mason by the cliff trail and through the Marina to Fort Point under Golden Gate Bridge. I hiked up and out the trail West of the bridge about a ¼ mile before turning back. The fog was really bad out that way. I caught a bus back to Chestnut Street where I had lunch at Los Hermanos, a nice chili relleno plate. I then caught a bus to Market Street and walked around downtown toward the Embarcadero. I watched some construction projects on some new tall buildings and looked at the Leaning Tower of San Francisco, The Millenium Building. I then caught the N Line back to the train station and back home by 1800. Lou made chili for dinner.

Chinatown street nearly vacant so early in the morning. An interesting way to trim a tree stump on Columbus Street.

Tide Pools below the cliff at Fort Mason.

Nice flowering bush by marina and a view of the GG Bridge from Crissy Field.

Fort Point on left and surfers below the GG bridge on right. 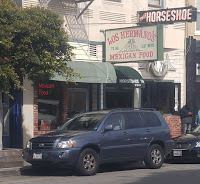