Saturday: (01/05) A rainy day. PBJ toast for breakfast. Leftovers for lunch. We got a call from Courtney who needed a ride up to redwood City to pick up her new car, a Chevy Bolt. Wise decision. I drove her up. Dawn can along and she stopped at Kepler’s bookstore for a short look before we came home. Lou made stew for dinner and Courtney joined us for dinner. 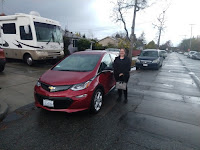 Sunday: (01/06) I made a quick trip to Safeway for some of my ciabatta bread. Lou made sausage gravy which we put over torn up bread. Nice breakfast. I headed off North to shop at REI, a new Sports Basement store, Home depot, and others. I caught lunch at Harry’s Hofbrau in Redwood City. I made it home a little after 1430. I wanted to check the water status. We are having a good rain storm today. I ended up napping until Lou and Dawn returned from their outing shopping in Mountain View. They had lunch at Chili’s. Just after dark I was unloading some of Lou and Dawn’s shopping treasures from the Jeep and got to see our sump pump do a discharge. It makes me feel more comfortable knowing it’s still running after I messed around in the electrical box. I had managed to break a wall wart for one of the TV amplifiers and ended up installing a plug strip for the pump and TV amplifiers to eliminate a problem with the door hitting the plugs. I had leftover refried beans for dinner.

Monday: (01/07) No rain today. I went outside and set the levels for the next section of bricks to be laid. I had to chip off some of the edge wall to allow a good mortar thickness. Also had to remove a short brick where a full brick will go and trim some grout from the edge of another. I then did some leveling of the baserock inside the wall. As i was finishing up my alarm went off for the ATT technician to arrive for the fiber Internet installation. The window was from 1100-1300. I watched TV and had lunch as I waited in the house for the tech. At 1330 I called Sonic to see about the missed appointment. ATT does the actual install for Sonic. I also mentioned that I hadn’t yet received the modem which was to have shipped 01/02. It has yet to be shipped. Hopefully it is shipped and an installation can be completed before we leave on our trip. I got back out later and installed some of the edge bricks.  Granola for breakfast. Wiener and cheese sandwich for lunch. Leftover stew for dinner.

Tuesday: (01/08) I made an early run to Lowe’ for mortar and sand. On the way back I picked up a breakfast burrito near Lowe’s at Lopez Taqueria.  breakfast. I installed the last of the edge bricks by the new garden area. I had some drizzle while working but it didn’t develop into rain. We had leftovers for lunch. We all went to see the movie “On The Basis Of Sex”. We learned that our closest theater, the one we thought was always the most expensive, actually has a Discount Tuesday with all movies at $5. Our calendar will now have a note on Tuesdays. We had salads for dinner 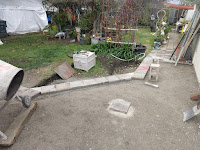 Wednesday: (01/09) Lou made ham and eggs for breakfast. I attended a webinar before heading outside. Almost a shame to waste part of a no rain day. I trimmed the corners of the edge and it started raining so it looks like a day inside. Lou made chili rellenos for dinner. I got an email from Sonic that said the ATT technician had been here and no one was home. The installation was on hold with the earliest appointment after 1/24. I called Sonic and told them to cancel the order. They still had not shipped my equipment and I wouldn’t be available for an installation that far off in January, or even any other time this coming year. They missed their chance. It pissed me off that the ATT technician lied because I was within 10 feet of the door during the entire appointment window and they had my phone number as well. I had high hopes for the fiber connection. Maybe in a year or so ATT will learn how to do it.

Thursday: (01/10) Granola and banana for breakfast. I worked outside laying more bricks in front of Dawn's shed. Getting the correct levels was fun because of changing grades due to Dawns shed being higher than Ernies and Lou’s. Lunch buffet at Round Table Pizza in downtown Palo Alto. On the way home I decided to pickup more sand. Since I was downtown I decided to get some at Home Depot. I try to shop at Lowe’s if possible because of the political bent of the owner. No need to support idiots.But Lowe’s further away than either of our closest Home Depot’s. They pissed me off even more that I already was. I loaded my 12 sacks of sand from under a nice price sign of 3.45/bag. I was charged 4.75/bag. Unfortunately I didn’t check until after it was paid for. I complained and had to go to the service/return counter to get it straightened out. Of course, the problem was then wrong product under the wrong sign. Now, in actuality I probably could have required they change the price to match the sign but I instead just returned everything and won’t be returning soon. Unfortunately, my Ryobi tools are only available at Home Depot stores other than from Amazon so it looks like Amazon will get more business. I’m getting more and more cranky in my old age. Lou and I went to dinner at Los Altos Taqueria. 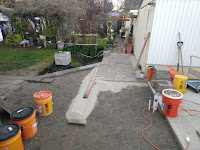 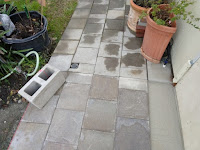 Friday: (01/11) I went over to the neighbors to remove her bathroom sink for her to gai access to the wall for repair. Unfortunately, the hot water wouldn’t shut off so she decide to repair the wall with the sink in place. I them made breakfast and watched TV until about 1030. Then I was outside installing bricks. I have the walkway in front of Ernie’s shed still to do as well as the patio area. I got rained out about 1500. I made chorizo hash and eggs for breakfast and also had it for lunch. Lou made fish with rice for dinner. 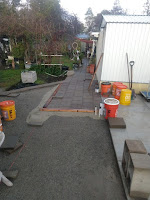 Saturday: (01/12) Leftover chorizo hash for breakfast. I got out really early at 0700. Since we are not allowed to make construction noise before 0800, I just moved a bunch of bricks inside the yard from the driveway pallet and did other setup until I could use the saw. I laid a bunch of bricks connection the rear walkway to the main walkway. This involved a lot of cutting to fit the angled bricks. I ended up a little after dark with only one row of bricks to install to have a walkway all the way into the yard. Because that is where I’m reversing the drain direction they will need angled cuts to bend to meet the two directions. I’m also using them to stretch the bricks an extra 2 inches by cutting to bricks into one angled brick. You’d have to see it to understand. A salad for lunch, BBQ ribs with baked potato and green beans for dinner. 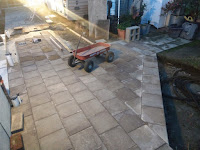 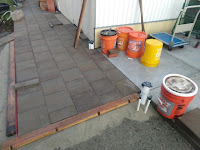 Sunday: (01/13) PBJ toast for breakfast. I worked on the walkway fitting the transition bricks. The walkway changes drain direction at those bricks. I then finished the edge by Ernie’s shed. I also fitted the bricks by the drain inlets. And finally, I laid two more rows of bricks in from of Ernie’s shed. After that I cleaned up. We’re expecting rain this evening. We’ll be departing for an extended trip in a couple of days so i had to shut things down. The walkway is finished except for the patio/walkway under the front of Ernie’s trailer, the patio under Ernie’s temporary shed location and some grouting and plumbing for sprinklers and faucets. 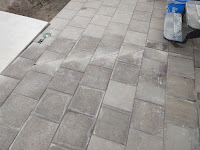 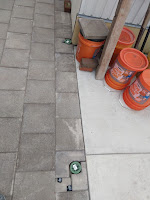 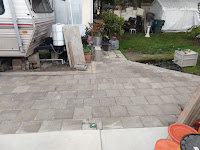 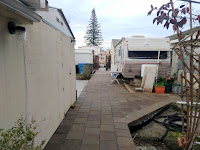 Monday: (01/14) Dentist Day. Lou and I were off to the dentist, me for a cleaning and Lou for a checkup. After the dentist we stopped at the Country Inn for breakfast. Then some shopping on the way home. Lunch was dim sum from Dim Sum King. It’s raining today so I’m tinkering on the computer and packing to leave. Lou made stuffed green peppers with rice for dinner.

Tuesday: (01/15) Loading and sorting the RV. A rainy day. Leftovers for Breakfast and lunch and dinner from Super Taqueria. 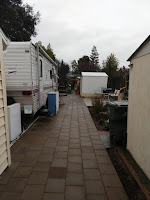 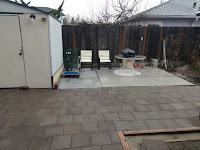 I trimmed the drain pipes and water lines that were projecting from out from the bricks. No trip hazards left. 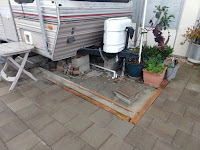 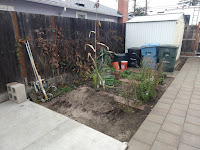 Finished enough to leave for a while. i had to place 2x4's next to the bricks to keep them in place until I return to finish the installation. It will be interesting to see how the garden looks when we return.
Wednesday: (01/16) Worked on loading the RV. It was mostly already done. It was raining really hard all day. I went shopping for a smaller printer for the RV and installed it in the RV. I had planned on having the RV priter behind the new front TV having built a cabinet for it there but it’s too difficult to access while printing so with the smaller printer I just stow it in a cabinet above the driver. I also went to the Campbell Home Depot to get a Ryobi 1 gallon battery powered air compressor and set it up. Granola for breakfast. Egg rolls for lunch. Meatloaf and baked potatoes with peas. Thursday: (01/17) I finished some details and stowing in the RV. A few things in the yard like spreading the new garden dirt, and securing my junk wook stack after it was rattled during the concrete work. The squirrels and the wind like to topple things. I also made a run to Harbor Freight to get and air hose and attachments for my new compressor. It’s a 3’ hose, just long enough and includes a snap on connector for the tire side. PBJ toast with a sausage for breakfast. Hamburger salad for lunch. Lou and i went out to dinner at IKEA while Dawn was off to a birthday party/dinner. 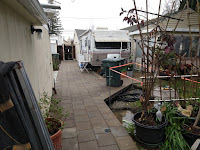 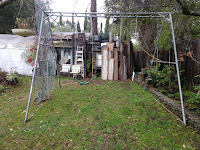 A couple of final pictures before leaving. I added some orange tape around the hole I left where the new garden spot will be. I also tied up the boards leaning on the cottage. I'm sure the wind or squirrels will rearrange them soon.
Posted by Don Wood at 8:40 PM