Friday: (03/15) Lou made French toast for breakfast. We took a last walk out to see our alligators. The big one was out in the water this morning. We drove highway 90. We stopped in Mobile Alabama for a walk downtown. Along the way we had lunch at El Papi Mexican restaurant on Dauphin Street. Really good. Beautiful old houses and a great tree canopy. Leaving Mobile was a problem. Any road we tried (90, I10, 98) all had a warning sign prohibiting hazardous loads in the tunnel. An RV’s LPG tank is generally considered a hazardous load in a tunnel so I tried one path after another. It was just another demonstration of ignorant traffic engineers. Because 90, 98, and I10 join together at different places the sign was posted. The tunnel was on highway 98 after it departed the Highway 90 I10 route. A little more clarity would be simple to do, but wasn’t. These guys never seem to actually drive the roads they foul up. We took Highway 59 down to Robertsville and spent the night at a Camping World store. They even have electrical, water and a dump. Nice. We stopped early because we intend to take a little side trip North tomorrow. If we had continued just a few more miles we could have made this a three state day going in to Pensacola, Florida. (GPS: 30.534926, -87.707851) 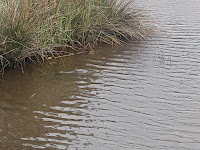 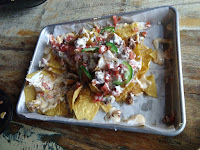 The big alligator was out when we left Davis CG. We had lunch in Mobile at Papi Mexican restaurant.