Saturday: (05/30) I stripped the forms off the patio edge. I had planned to set some bricks on the edge but it was sprinkling slightly all morning and I convinced myself to take the day off, and did. Granola and apple for breakfast. Lunch from Harry’s Hofbrau, our usual prime rib for Lou and Dawn and veggie lasagna for me. A nice ham and cheese sandwich for dinner. 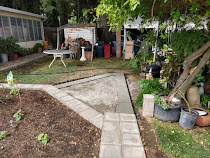 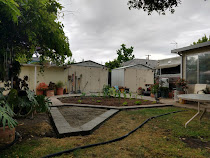 Sunday: (05/31) Lou made an oven omelet for breakfast. We watched the usual Sunday Morning show on CBS. I went outside and brought out the temper and tamped the base rock for the patio. I then mixed some mortar and installed most of the edge bricks for the patio. When I ran out of the one bag of mortar I had mixed, I stopped. I got all but about 4 whole bricks and the two corner pieces. After the ones I set today are dry, I can install the rest without knocking the others loose as well as using most of the next bag of mortar mix. It’s easier to mix a whole bag in the mixer than smaller quantities as needed. I cleaned up the work area as well as myself and relaxed most of the rest of the day. About 5pm Lou and I went to the Ace Hardware store and Lou got a few things for the garden. I had leftover lasagna for lunch. Lou made chicken pot pie for dinner. 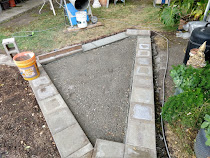 Monday: (06/01) Granola and banana for breakfast. I mixed some mortar and set the last of the edge bricks. Only two cuts needed. I took a bike ride out to the Bay Trail and back into Mountain View on the Stevens Creek Trail. I stopped at Smart and Final Market and bought a pie. The last one was excellent and they are only $3.99. If it got damaged in the bike pannier on the ride home, no big loss other than an intact taste treat. I also picked up lunch at Lucky Chinese Bistro, my usual chow fun noodles and black bean fish. A nice relaxing afternoon in the man cave. Dawn made some salmon cacciatore for dinner.

Tuesday: (06/02) Granola and banana for breakfast. I worked on laying the patio bricks all day. I still have about eight more to lay and fit. I ended up having a little problem fitting the last few bricks and will have to recut two in the morning. Lou made a broccoli and shrimp salad for lunch. Lou made a corn salad for dinner. 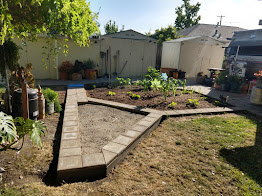 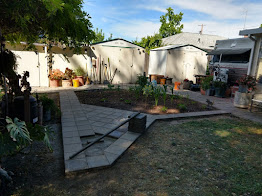 Wednesday: (06/03) Granola for breakfast. I was at work before 0800 and installed the last few bricks finishing the new patio by the new garden. I must say it looks pretty good. I finished just before my 1000 webinar and after a shower adjourned to my man-cave (RV) for the webinar about 5 minutes late. It was already very hot and I had sweat through my clothes in the two hours I worked. I relaxed the rest of the day. Chili for lunch. Lou made a grocery run in the afternoon. For dinner it was a vegetable assortment with veggie meatballs and tater tots. 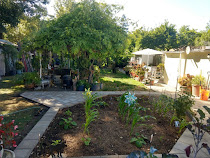 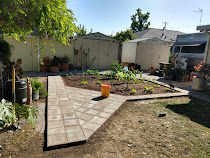 Thursday: (06/04) We enjoyed our morning tea out front watching the garbage pickups. I then weeded the berries behind Dawn's garden. I then relocated some big potted plants to allow two chairs on the rear sidewalk. After a rest, I returned to the yard and installed four of the big concrete blocks starting the remodel of the Mt Donald raised planter. I also brought the other 12 blocks out and gave them a bath. I’ll start installing them tomorrow or the next day, depending on how my back feels. These blocks weigh from 150-250 pounds each. Tiramisu for breakfast. Chili with a pastrami sandwich for lunch. Lou’s Iranian chicken salad for dinner. 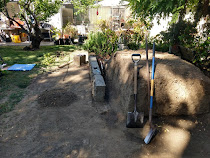 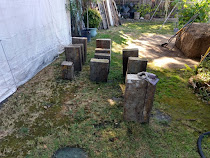 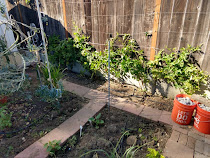