Saturday: (12/16) Prepared to leave the campground at 1030 after a relaxing morning. That changed when the slides, jacks, and steps wouldn’t come in. I spent an hour and a half checking and testing everything. Obviously, something to do with the safety circuit that requires the engine to be running. Last things rattled before it working were some relays in the slide control compartment. It is still lurking. I may just shotgun the relays by replacing them all. We departed late at 1230. We drove down Highway 25 to Highway 198 then East over to Coalinga then South on Highway 5 to Bakersfield. We checked in at the River Run RV Park. Leftovers for lunch in Coalinga. We called my cousin Judy and her husband Don and Lou’s friend Anita and met at the Rice Bowl for dinner. I enjoyed their shrimp dinner. Best fried shrimp anywhere and outstanding chow mein.

Sunday: (12/17) We dropped Dawn off at a used bookstore then Lou and I visited my Mom, Dad and brother Robert at the cemetery. We confirmed that a marking problem had been corrected. We then stopped at a Mexican market for a look and to pick up some things. The final stop was at Camping World for a longer sewer hose. I only have two five foot hoses but when I tried to use the new second one it was a special use hose and unusable for my needs. CW had the hose I wanted but it was 50% higher priced than the same hose at the RV Park so I ended up buying it at the park. Lou dropped me off at home and I relaxed all afternoon. She and Dan hit the thrift stores. In the evening they brought Anita over to look at the RV and we all went to the light show at the California Living Museum (CALM) in the evening. Deep pit BBQ for breakfast at Milt’s. Leftovers for lunch and dinner. 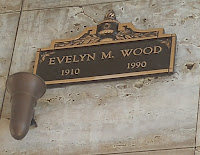 Monday: (12/18) A late breakfast and shopping at Winco in the morning. About 1500 Lou and Dawn were off to the thrift stores again. I relaxed at home. Dinner at the Golden Corral buffet. I started a pork roast with sauerkraut and potatoes in the slow cooker for tomorrow.

Tuesday: (12/19) We prepared to leave and then went to Noriega's Basque restaurant for breakfast. On return to the RV park we showered then did final prep to leave, got LPG and gas and headed off to Pismo Beach via Highway 166. We were all settled in before dark at the SLO County Park in Oceana. I had started a pork roast with sauerkraut and potatoes in the slow cooker last night. It was wonderful for dinner. After dinner, Lou and Dawn visited a thrift store while I relaxed at our new home. I showed them photos and videos from my pinnacles hikes in the evening. 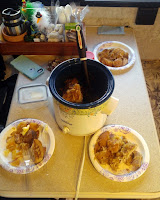