Wednesday: (12/05) I drove the RV down to Leale’s RV in San Jose to have it looked at regarding the possible bad shock absorbers. Lou picked me up and we stopped by at Dawn’s Apartment and I installed a new smoke detector. I also finally installed the new toilet I bought a few months ago. It works so much better than the old one. I ordered a new MiFi modem and it arrived today. I set it up and it seems to be working fine. It’s an Unlimited, unthrottled prepaid account for $65/month. If it works out it will be good to use in the RV and may just replace our home DSL line as well. Granola with diced apple for breakfast. Chinese food for lunch. Pork chops with rice and Brussels Sprouts for dinner.

Thursday: (12/06) I was out early setting up to pour the first slab of Ernie’s shed floor. Ernie helped. It took a little while to get the mixer placed for easies use, to decide that directly pouring wouldn’t work because the mixer doesn’t like flip over to pour from the other side so we used a wheelbarrow. Bur once were were set we poured the 28 bags needed for the slab in a little over an hour. The rest of the day was spent waiting and finishing. When we got home from Chili’s about 1800 I was able to do the final troweling. It takes longer to dry with the cool weather. Granola and diced apple for breakfast. Leftover Chinese food for lunch. Dinner at Chili’s. 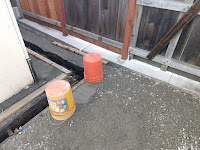 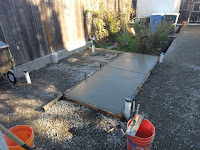 Friday: (12/07) I met the inspector from Planet Orange, the termite people at 0830. He inspected the house and confirmed we have drywood termites in much of the front of the house. We’ve tried to ignore them with the idea there would still be enough of the house to knock down when we sell it since that what happens to most of the older houses in our city when they are sold. Now it looks like we may never leave so perhaps we’ll need to make the house last. I then got busy removing the forms from the concrete slab i poured yesterday and forming for the second pour tomorrow. I needed some more tie wire for the rebar so i visited Home Depot in Sunnyvale. Along the way I got lunch at Super Taqueria. Lou and Dawn were out all day for appointments and to have a Christmas dinner at IKEA. Granola and diced apple for breakfast. A super burrito for lunch from Super Taqueria in Sunnyvale. A pork chop with cottage cheese and Brussels sprouts for dinner. 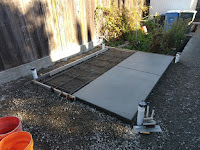 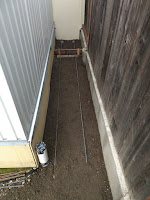 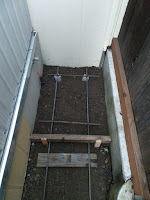 Saturday: (12/08) Ernie and I poured the second half of his shed’s floor today plus a little piece behind Dawn’s shed. They both took forever to dry. I did the final troweling at 2100.  A wiener and cheese sandwich for breakfast. PBJ toast for brunch. Chili beans for lunch and dinner. 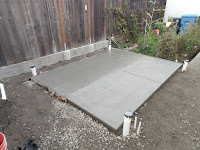 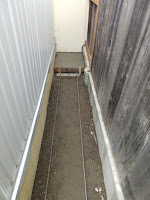 Sunday: (12/09) I stripped the forms from the second slab first thing. I then mixed and poured four bags of concrete to do another 30 inches behind Dawn’s shed. I then started preparing behind Ernie’s slab and also the space between the two shed. I had to adjust the depth, add forms, set the drain inlets height, and install a drain trench. The drain angle is a bit low so i just hope it is enough to let all the water find the drains. I had to work about an hour after dark but i got all the rebar and forms ready. I do have one form piece to install because I need to cut some notches in it and it was too late to make noise. A sausage and cheese sandwich for breakfast. Shrimp queso dias for lunch. Fish with rice and carrots for dinner.

Monday: (12/10) I was up early to finish constructing the forms and adjusting the rebar. About 1000 I started mixing and pouring the concrete, by myself today. I mixed about 40 bags pouring half of what will be the garden shed and all behind Ernie’s shed and the fence and another short piece behind Dawn’s shed. Only two pieces to pour tomorrow, about half as much as today to finish the concrete in the backyard. The afternoon was spent relaxing and finishing as needed. I did the last troweling about 2300. I discussed the RV repairs with Leale’s and it will be about two weeks before it comes back. I also scheduled the termite treatment for tomorrow. Breakfast from Happy Donut. Leftover pork chop with carrots and rice for lunch. A cheese burger for dinner. 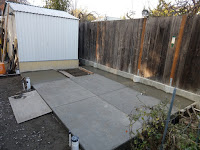 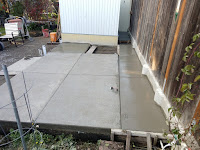 Tuesday: (12/11) Waffles and sausage for breakfast. I was out by 0730 and stripped the forms and setup the rebar for today’s pour. Ernie helped and we finished it fairly quickly. I then spent some time putting things away since this finished the concrete pours. About 1600 I did a final troweling then after a shower, we were all off for dinner. We drove down to Willow Glen in San Jose for dinner with my fellow hikers at Aqui’s Mexican restaurant. We then all took a walk around the neighborhood looking at the Christmas lights on the houses. This is probably the best decorated neighborhood in the bay area.  Lou took a fall on the walk and broke her glasses. 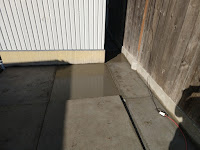 Wednesday: (12/12) I cleaned up the concrete, removed the tape from the drain lines and trench, removed a forgotten form piece, and washed down the walls of the shed, the fence and the concrete. As I was finishing that, i got a call from the RV shop with some question about the RV. They couldn’t get power for the coach to turn on. They thought it might be something to do with the mods I put in. i could help them over the phone so I drove down to their shop in San Jose. Since I haven’t drawn a circuit diagram, I sketched one for them. Turns out nothing wrong with my mods, just an odd coincidental failure of the disconnect solenoid. I really didn’t know where it was but thought it might be in the compartment where the jacks control is. It was. On my way home i stopped for lunch at the Lucky China Bistro in Mountain View. Lou called and wanted me to meet here for a visit to the doctor. Dawn made gnocchi for dinner. 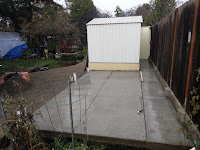 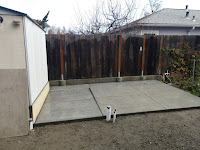 Thursday: (12/13) I poured the concrete patch under the gas meter. It’s a cap from .5 to 1.5 inches thick to bring the concrete up to the new level. That was it for me today. Lou and Dawn were busy cleaning up the cottage and preparing for the flea market sale. Popcorn for breakfast with a leftover pork chop. Chicken artichoke with rice and asparagus for lunch. Dinner at Hobee’s Restaurant, a stromboli omelet. 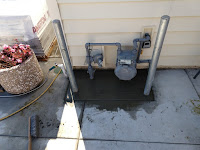