Monday: (02/24) I managed to delay starting work through the morning. I did some organizing of the apartment. I ordered some things online. I went over to the 7Eleven Amazon locker and picked up my new Battery Voltage Monitor (BVM712). My old BVM702 seems to be dead and the 712 has bluetooth so I ordered it as the replacement. I also got a couple of fans to use for a crawl space vent fan after I make a mounting plate for them. So then it was near lunch so I picked up a sandwich at Subway and a Chai Latte as well and had lunch before work. At work I set up my big scaffold and stripped more of the hose near my apartment door. Breakfast was peanut butter and jelly waffles. Lunch was a meatball sandwich. Dinner was artichoke chicken and rice.

Tuesday: (02/25) I went out shopping at Lowe’s in the morning. I really don’t like the cool mornings. After lunch, I tried to start stripping but the wind was too strong and my debris would have ended up all over the yard and lawn. So, I went off again to Harbor Freight and bought more tarps and clips. Back home I setup my second scaffold and hung tarps on the outside of the scaffolds attached with the clips.But after that was near 4pm and no reason to start. So, tomorrow I may have to start early in the cool air when hopefully, it won't be windy. Waffles for breakfast. A tuna and cheese sandwich for lunch. Chicken soup and toast for dinner. 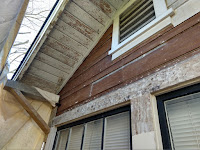 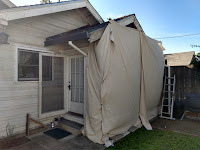 Wednesday: (02/26) I worked a little in the morning. At 1000 I attended my Wednesday webinar then returned to work. I stopped a little after 1700 and took a shower. Lou called and said she and Dawn had colds so I’m staying in San Jose for a while. I drove home to get my hiking backpack and clothes. I also replaced a light bulb for Dawn and looked at the new Roku stick in the living room. It no longer responds to the remote. Must be a dud, only a week old. Waffles for breakfast. Tuna sandwich and chicken soup for lunch. Chinese food from Lucky Chinese Bistro in Mountain View. 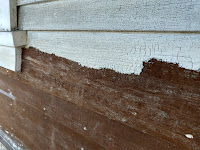 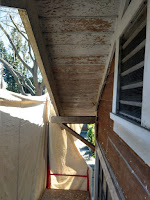 Thursday: (02/27) I managed to get out later in the morning and strip the rest of the paint under the eves by Dawn’s apartment. I finished that about 1330 and broke for lunch. Dawn and Lou had some online orders they wanted me to do, so I did them at lunch. After lunch I walked over to 7Eleven to get two Amazon packages. One was my new Wen sander. It accepts velcro sanding sheets. For some reason I thought it came with 12 sheets but it only had one sheet in the box. I did order more sanding sheets but they don’t arrive until next week. Then I moved my scaffolding away from the house more so I could reach the outside of the eves. By then it was nearly 1600 so I called it a day. No need to get more dirty. I cleaned up and vacuumed the debris before enjoying my shower. Granola and banana for breakfast. For lunch I had a chili size. Dinner at Sweet Tomatoes Salad Buffet. 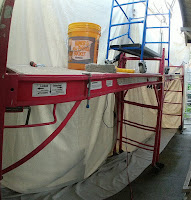 The Hyundai has a new problem. The EPS (Electric Power Steering ) light came on both when I left home for dinner and for the return. Restarting the car several times fixed it? Time to get it looked at.
Posted by Don Wood at 4:34 PM