Saturday: (06/13) Granola and banana for breakfast. I planted the begonias and repotted another fuchsia that we got at one of our nursery visits. Lou and I went on a hunt to find an umbrella base. No cheap ones available and they certainly are not worth the $35 prices we found. Pastrami and cheese sandwich for lunch. Otherwise a relaxing day. About 1800 we were off to Kaiser Emergency to have Lou checked. She hit her head and needed to be checked. No problem found. Chili over baked potato for dinner. 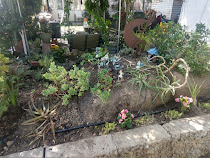 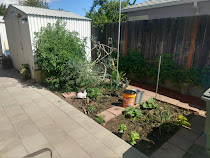 Sunday: (06/14) Lou made last night's planned dinner for breakfast. Meatloaf with chunky onions and peppers with finger potatoes and roasted red peppers. I tinkered in the yard adding some drip emitters to the garden and adding a sprinkler timer to the new garden. I’m still waiting for Lowe’s to deliver the parts for the garden watering system. I also loaded the recycle dumpster with stuff we pulled from the yard tent. I had to crush and cut as needed to make it all fit. Pastrami and cheese sandwich for lunch. I made some pork ribs with potatoes and sauerkraut in the slow cooker for dinner.

Monday: (06/15) I made smoked pork chops with fried sauerkrauted potatoes and eggs for breakfast. The morning was spent working in the yard. I reprocessed the dirt from the pots removing the roots and debris. It is a mix of dirt, sand and potting mix. I recovered 3 contractor wheelbarrows full of dirt and added it to the Mt Donald raised bed. Since I rebuilt Mt Donald, it is getting harder to dump dirt on it because it is planted. After lunch of meatloaf and cottage cheese, Lou and I went to Lowe’s for some potting mix and sprinkler fittings. We stopped at Smart and Final on the way home for groceries. Back home I added a tee that I just bought to hook up the garden drip section I installed yesterday for the tomatoes in the old garden. I relaxed the rest of the afternoon. Dinner was chili.

Tuesday: (06/16) Granola and banana for breakfast. I installed the drip emitter tube in Dawn’s garden. It’s the kind with built in emitters every 1 foot. Just the right length to get the whole garden. We had cheese, pastrami and crackers for lunch. Dawn and I rode over to Stanford and had our chai lattes at Coupa Cafe. I left Dawn to explore Stanford and headed off on my ride through the baylands. I continued through Menlo Park out Willow Road to the Dumbarton Bridge. I’d never stopped at the little view point at the bridge. I took the short trail out to the Hetch Hetchy pipeline and railroad bridge. I had forgotten about part of the RR bridge burning down a few years ago. I never realized the pipeline passed through here and that it was beside the RR bridge that burned. Unfortunately, the Bay Trail doesn’t continue from that viewpoint so I had to backtrack around to the other side of a little bay. There is a new trail that is completed but not open yet so I had to go through the East Palo Alto neighborhood until I could connect with the trail. From there I backtracked out to the viewpoint opposite the earlier viewpoint with a view of the opposite side of the bridges. I then continued on the Bay Trail toward home crossing hwy 101 at the Embarcadero bike bridge. At home I found Lou gone and Dawn not home with her scooter yet. I called Dawn and she had a dead battery and Lou had gone to get her with a charger. I suggested she return and we go back with the scooter carrier. She came back and I mounted the platform carrier and we returned to pickup Dawn and the scooter at the Stanford Oval. We had leftover sauerkraut, potatoes and pork with a broccoli slaw salad for dinner.

Wednesday: (06/17) I worked in the yard cleaning flower beds, recycling empty pots, and doing general yard cleanup. I attended my Wednesday webinar. I also had fire and burnt some wood scraps. And in the evening I gave myself a beard and haircut. Granola and banana for breakfast. Chopped salads form our nearby Corner Bakery Cafe for lunch. Chicken with finger potatoes and broccoli slaw.

Thursday: (06/18) Our morning entertainment was watching the garbage pickup and see the neighbors strolling by on the sidewalk while we enjoyed our morning tea. A little tinkering in the yard and a lot of tinkering with the computer the rest of the day. In the evening Lou and I went to Sprout’s and Grocery Outlet Markets. Lou made waffles for breakfast. Lou made gazpacho soup for lunch. For dinner Lou made savory chicken broccoli salad.

Friday: (06/19) I tinkered in the yard in the morning. In the afternoon I made a grocery run to Walmart Neighborhood Market, Smart and Final, and Nob Hill. Each has their own items we like. In the evening Lou and I looked at some houses up in Vancouver, Washington via Zillow. We are interested in possibly moving there sometime. Too bad we’re not staying there right now so we can do non virtual tours. Soft boiled eggs for breakfast. Pastrami and cheese sandwich for lunch. Corn salad for dinner.

Saturday: (06/20) An early exit of the house for granola and banana for breakfast in the backyard with Lou and the birds. Lou and Dawn wanted a raised deck on Dawn’s scooter so her legs are bent naturally. I put together some 2x4’s and they tried it out this afternoon. Lou picked up lunch from Harry’s Hofbrau in Redwood City. I had my usual lasagna and they had prime rib. Otherwise a relaxing day. Leftover lunch for dinner.

Sunday: (06/21) Early breakfast at the Country Inn in Cupertino. My favorite Swedish pancakes.We managed to visit Sprout’s Market on the way home and spent less than $25, a first in a while. Usually well over $100. At home I tinkered on the computer. Late in the day my Father's day gift arrived, a nice Ryobi cordless grinder.
Posted by Don Wood at 11:39 PM