Friday: (06/17) I slept in. No breakfast. Salad with some bologna and cheese for lunch. More relaxing today. Tuna rice with green beans from our garden for dinner. I received a bunch of electrical items for the van today.

Saturday: (06/18) I started with a run to the hazardous waste event at the dump. I had two buckets of batteries and ink cartridges. On the way home, I made a run to Lowe’s in Sunnyvale to get a couple of circuit breakers I had ordered. I also picked up some more begonias. Back home, I planted the begonia in my succulent garden. I added a stake to hold up some new sunflower plants. I also removed the old ladder in Dawn's garden and installed a couple of my garden screens for Dawn's beans and peas like I installed in my garden for the scarlet runner beans. We all went to look at an open house down the street. I helped our neighbor install a front basket on her bike that needed longer support arms. I just used some hose clamps to tie the arms to the forks rather than the axle. Ham and cheese sandwich for breakfast. Lunch from Harry’s Hofbrau in Redwood City. I got my usual veggie lasagna and Lou and Dawn their prime rib dinner. I had a pork sloppy joe sandwich with some salad for dinner. I received some bolts and a DC circuit breaker.

Sunday: (06/19) I rode the bike over to Grocery Outlet for some milk and eggs and the usual too much other stuff. I can’t be trusted there. I received some bolts and T-nuts today. Leftover lasagna for breakfast. Salads for lunch. Smoked sausage and veggies with corn on the cob for dinner.

Monday: (06/20) We were off early to the San Jose house to look in the attic for things. Lou and Dawn will be attending the Antiques Roadshow tomorrow at Filoli Historic House & Garden in Woodside and were looking for something to take to the show for appraisal. No luck finding what Lou was looking for. We stopped at La Victoria for breakfast. Next, I stopped at Harbor Freight for a knockout punch set and a Torx driver set. Lou and Dawn examined the Marshall’s across the street. Next stop was Lowe’s. Lou and Dawn got some planter mix and some clay pots. Unfortunately, my order that is due 6/21 didn’t magically come in early. Back home, it was nap time and time to check on the sewer construction project. They were doing some repaving on pour street and pulled in a section of pipe a couple of streets over. We headed off at 1500 for Lou’s dental appointment. Dawn and I did some shopping for a couple of hours while Lou was worked on. When Lou was through, we headed off to visit a couple of thrift stores in Sunnyvale and Mountain View. After the second visit, we visited Nob Hill Market for a couple of things. We then headed back to Lowe’s. I had received notification that my order for the two sub panels for the van were in. Not good timing but halfway good timing since we were only halfway home. I had a salami and cheese burrito for my dinner. I received more puck lights, dimmers and the 30 amp service inlet connecter and a short adapter for it to connect to a 20 amp outlet.

Tuesday: (06/21) The city’s sewer replacement crew was busy working on repaving our street. I picked most of the apricots from our tree this morning. I received the third solar panel but boy did it go through the mill getting here. Footprints all over on both sides of the box. Rips and punctures of the box all over. And most worrisome, a screw fully penetrated the box on the active side of the panel. It was a ½” sheet metal screw. Fortunately, the panel, somehow, doesn't seem to have any damage. I need to test them soon. I also received the wye adapters and home run cable for the solar panels as well. Biscuits and gravy for breakfast. Pork roast and cheese burrito for lunch. More roast pork and some salad for dinner. 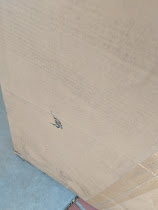 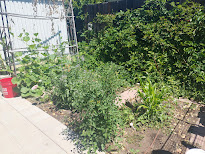