Wednesday: (12/02) Alarm went off at 0600. Wow. Seems like the old typical workday morning, up before it’s light. Actually, I used to wake at 0530.. Granola and banana for breakfast. I was off early to get my implant tooth checked at the Dentist. I was in and out at 0801, less than 10 minutes. I tried to get gas at our cheap station but after doing the credit card thing, it wouldn’t pump any gas. Finally I looked up high on the pump and there was a sign that they were out of 87 and 89 octane. The premium was no deal and I had half a tank so I left. I also tried to get my ciabatta buns at Sprout’s Market but they were still out. So then I stopped at Safeway for my buns which they usually have but are not as good as Sprout’s . Back home before 9am. Lunch with Lou and  Dawn at Ann’s Cafe in Menlo Park. Then some shopping at thrift stores and REI. Lou bought some new trail runner shoes at REI. Lou made noodles with leftover beef from last night and some corn for dinner.

Thursday: (12/03) Lou made a nice steak and egg with home fried potatoes for breakfast. I spent much of the day outside rearranging planters on the greenhouse patio. I also patched up where I placed the garbage cans where I had probed the dirt under where the tent was. We picked up lunch from the Lucky Chinese Bistro. Lunch was about 1500 so not much was needed for dinner, just granola. In the evening I set up my new mini computer. The previous one I had setup in the RV got moved to the living room TV for Dawns classes. The new one is identical. 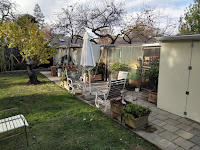 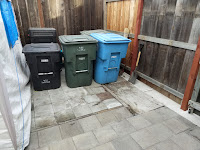 The rearranged greenhouse patio area. (left) The area that was under Lou's tent that will need to be dug out later when I get  dumpster.
Friday: (12/04) Leftovers for breakfast. I tinkered on my new computer in the RV and installed it’s hard drive. Dawn made seafood soup for dinner.

Saturday: (12/05) I picked up a breakfast English muffin with sausage, egg and chess with a maple bar for breakfast. I was on my way to little grocery shopping before the new lockdown starts tomorrow. We are soon to be in a stay at home lock down for the next five weeks due to the third wave of Covid 19. Most Bay Area counties have done a preemptive lockdown ahead to the state mandated lockdown that will start soon. At home, I tinkered with planters rearranging the patio and recovering potting soil from empty pots. I also installed the new tarp over Lou’s tent. Hopefully it stays intact and Lou’s stuff makes it through the winter. I also found a motion controlled solar light I got on my last visit to Harbor Freight and installed it above the gate. I already have a bunch more on the way from Amazon as well. Lou made open faced chicken sandwiches for lunch. Hobo dinners for dinner. 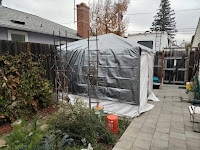 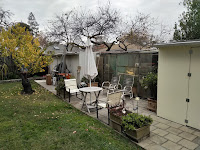 A new top for Lou's tent that had a few holes in it. The greenhouse patio with  table. 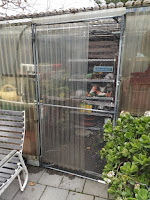 Greenhouse ready for cold weather. I added the door panel.
Sunday: (12/06) I made a nice steak and eggs breakfast with home fried potatoes. There was a little drizzle in the morning so I didn't get outside to work, much. I did install a bunch of solar lights along our main backyard walkway. Otherwise a nice day off. Grilled cheese sandwich for lunch. Chili for dinner.

Monday: (12/07) Oatmeal with honey for breakfast. We took a drive before lunch for Dawn to get a USB flash drive. I didn’t know that so when I learned I told them that the ones I ordered from Amazon for her would arrive today. Right hand/Left hand...etc. So we changed our plans and they visited a couple of thrift stores instead. I picked up a nice veggie burrito from Tacos El Gruelense while then enjoyed a pastrami dinner at Harry’s Hofbrau in Redwood City. San Mateo County is not under the stay at home orders that the rest of the bay area is. After lunch we continued on to Best Buy then home. Lou made smoked pork chops with baked potatoes and corn on the cob for dinner. 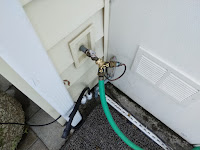 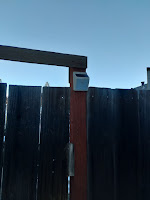 I replaced a hose splitter that was leaking. I also installed several solar lights at the gate, washer and walkway.
Tuesday: (12/08) Smoked pork chops with strawberry waffles for breakfast. Lou and Dawn went out to Willow glen and Lou bought some shoes. They also walked around the village and looked at neighborhood Christmas decorations. I relaxed at home. I binged on the Undoing TV mini-series. Ham and cheese sandwich for lunch. Leftovers for dinner.
Posted by Don Wood at 10:00 PM