Getting Ready For A Trip

Wednesday: (04/29) Morning Wednesday webinar. Lou and I made a trip to a couple of hardware stores looking for a 3” trenching shovel. Couldn’t find one. I have a 4’ shovel but a narrower one will create 25% less dirt to get rid of. I did replace the sprinkler valves by the arbor. One of them was leaking but I haven’t been able to determine which it is so I did a bulk repair. I also installed a wireless sprinkler valve to replace the one that controls drip sprinklers by the house. That was easier than replacing the cable that ran through where the garden is now. I tested the sprinklers and aligned the sprinklers that were relocated for the garden. Popcorn for breakfast. Leftover Chinese food for lunch/. Lou made a chicken chorizo meatloaf with baked potatoes and carrots for dinner. 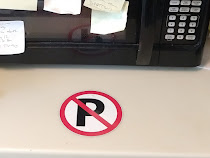 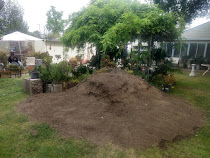 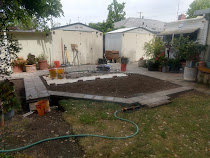 Thursday: (04/30) I relaxed all morning then got outside after lunch. I completed the backfilling of the edge of the new garden and dug a little bit of the trench to extend the gray water discharge. I then worked on the sprinklers adding some needed emitters for planters and resolving low flow on one circuit. Everything is now watering except the garden spots. No breakfast. Leftover spaghetti for lunch, A meatloaf slider for an afternoon snack, Salmon fried rice for dinner.

Friday: (05/01) Lou and I did some grocery shopping at Nob Hill Market this morning. In the afternoon I reorganized my base rock pile to create more room to store bad dirt in the front yard. I also drained and filled the RV fresh water tank. We’ve been using it since we filled it up in New York in September. There wasn’t too much left. Leftover lasagna for breakfast. Sausage and fries for lunch. Lou made chili relleno with leftover meatloaf and corn on the cob. 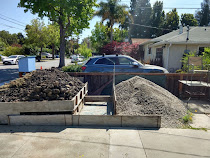 Saturday: (05/02) I dumped the holding tanks. I also installed a new connector on the old TV antenna cable. I still need to replace the cable , just not before our trip. I brought the slides in and raised the jacks and headed off with the RV to fill the LPG tank. Lou and I also tried to shop at our local Ace Hardware store to get some manure for the garden but the waiting line to get in was too long. On the way we noticed that the Summer Winds Garden shop had activity. They are preparing to open this Monday. Really nice! Frozen Waffles for breakfast. We picked up lunch from Harry’s Hofbrau in Redwood City. Had to pick up because they no longer do Doordash. Lou and Dawn enjoy their prime rib and I love the veggie lasagna.
Sunday: (05/03) Granola for breakfast. We enjoyed the Sunday morning TV shows and finished loading the RV. I had parked the RV on the street in front of the house yesterday when I returned from getting LPG. I hitched up the Jeep and we departed at about 1140. We arrived at Pinnacles National Park about 1330. The guard at the entrance to the park advised us of the park closure. Only people like us with camping reservations were allowed in. No driving beyond the campground. Only bicycles and hikers. Except, I learned when i checked in that Handicap Placards allow driving up into the park so Lou and Dawn will be able to see further than the campground. After setting up camp we relaxed in the yard listening to the quail singing. Lou and Dawn took a drive around the park. On our evening walk around the campground we watch 4-5 condors settling in to roost over the campground host living area. 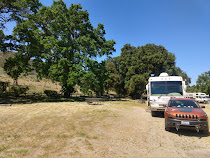